The brightness of the variable star fluctuates apparently. This variation is caused by a change in the emitted light. It can also be caused by something that is partly blocking the light. Most of the stars have at least some variations in luminosity i.e., the energy output of our Sun. For example, varies by about 0.1 per cent over an 11-year solar cycle. The first variable star was identified when Johannes Holwarda observed that Omicron Ceti pulsated in a cycle taking 11 months. 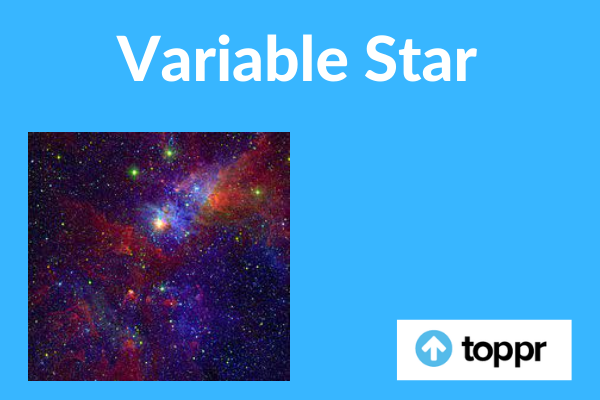 Variable stars are either intrinsic or extrinsic.

There are many reasons why the study on variable stars and the collection of data on variable stars is an essential and useful activity. Research on these stars gives a wealth of information on stellar properties such as the mass, luminosity of stars, radius of stars, and the composition of stars. This information can be useful to study other stars as well. These stars are observed for decades. These stars determine their long-term behaviour.

Anyone can be a variable star observer. Following are the things to keep in mind to begin observation of variable stars:

Variable star-gazers are familiar with the procedures of observing variable stars. These gazers cover dozens of stars a night swinging from one star to another without the help of charts.

Question: Why do variable stars change their brightness?

Answer: Variable stars change brightness because of many reasons. For instance, pulsating variables shrink and swell because of internal forces. It is the same as an eclipsing binary that dims when it is obscured by a faint partner and then brightens when the occulting partner moves apart. The different causes for light variation in variable star render stimulus for classifying stars into different categories as per their action.