When you buy a kg of onion, we generally assume that ‘1 Kg’ refers to its weight. But if we go by the principal definitions of Physics, mass and acceleration combined results in weight. Basically, if we assume the acceleration is 10m/s, therefore the mass is 100 grams. Hence, have you purchased 100 grams of onion, or is it 1 kg of onion? The entire logistics in relation to the relevance of the actual unit to represent the unit 1 kg is where the Unit of Weight comes into play. 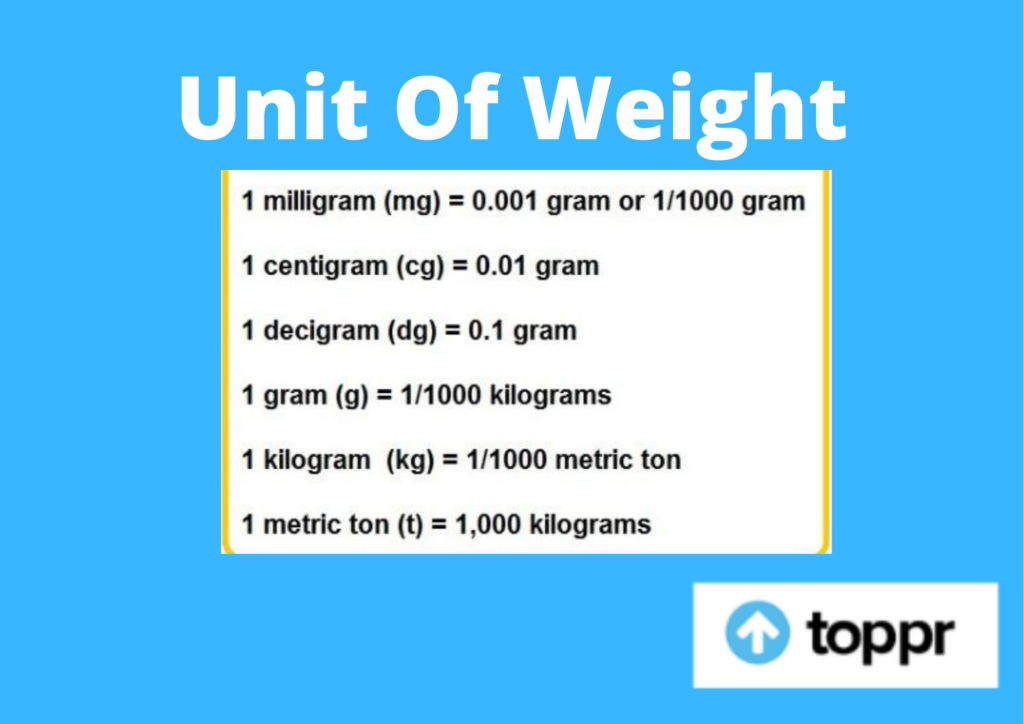 Introduction to Unit of Weight

If we think in a practical sense, then weight represents how heavy or light an object is, irrelevant of its size and shape. Identifying if the object is heavy or light is also practically an easy job. However, when it comes to calculating the exact weight of an object, the practical reference of light and heavy becomes objectionable.

For instance, 1kg of cotton may seem much lighter in weight than 1 kg of solid rock. This is where the confusion arises further. The numerical value of an object, when calculated based on the principal of Unit of weight, can have a different interpretation.

Application of Unit of Measurement of Weight and Mass

Units of Measurement is generally based on the most commonly used 4 types of recognized system.

As of 1956, SI unit System is the most used and recognized standard unit of measurement. It consists of seven basic units of Measurement. They are –

Weight can be defined as the force at which the gravitational field pulls an object towards the earth’s surface.

We all know that the centre of gravity has a specific force that attracts all the objects towards it. Unit of weight is the numerical representation of how much force is required to force an object to reach the earth’s surface.

Supposing you have a piece of wood that has a precalculated mass of 1 kg and it falls on the ground with a gravitational force of 1 meter per second squared.

As we know that weight is equal to the product of mass and gravity, so in this case

Hence the weight of the wood is 1 kg/mt/ sec sq.

In a simplified version, the SI unit of weight of kg/mt/sq sq. is called Newton (N), with respect to the scientist who discovered it.

2. CGS unit of Weight – Represented with the scientific term Dyne, it is implied in terms of the product of centimetre gram and seconds. Hence the numerical representation is 1 gram cm second sq.

Metric Conversion of Units of Weight

Gram is one of the most universally accepted units of weight. The conversion of a gram to kilogram is based on the standard denominations as mentioned below:

Mass is defined as the measurement of the matter within an object. Mass and weight have different values, but they are often confused as the same. It is called the quantitative measurement of inertia

Unlike weight, the mass has a constant value that is not affected by the gravitational changes. It is represented in form of a kilogram or gram. Therefore if a body has a mass of 70 kg on planet earth, it will remain the same even on the moon, regardless of the presence or absence of Gravitational pull.

Relationship between Mass and Weight

Even if the mass remains unchanged, the weight is altered based n the gravitational changes. Hence the weight of a person on earth and on the surface of the moon will greatly vary.

FAQ on Unit of Weight

Question 1: What is Weight?

Answer 1: Weight can be defined as the force at which the gravitational field pulls an object towards the earth’s surface.

Question 2: What is the SI uni of weight and Base Unit of Weight?

Question 3: What is the difference between mass and weight?