Standard measurement units are commonly used units of measurement that help in the measurement of temperature, height, length, weight, mass and more. Moreover, these units are standardised, which means that everyone dealing with them would get the same understanding of the weight, size, and other properties of objects. Some examples of standard units of measurement are feet, ounces, inches, pounds, kilograms, or cups.

A standard measurement unit is a quantifiable language that facilitates the understanding of the association of the object with the measurement. In spite of measurement being a very important part of everyday life, kids face difficulty in understanding the different ways to measure things. As such, kids often make use of non-standard units of measurement, like lolly sticks, pencils, cubes and more. 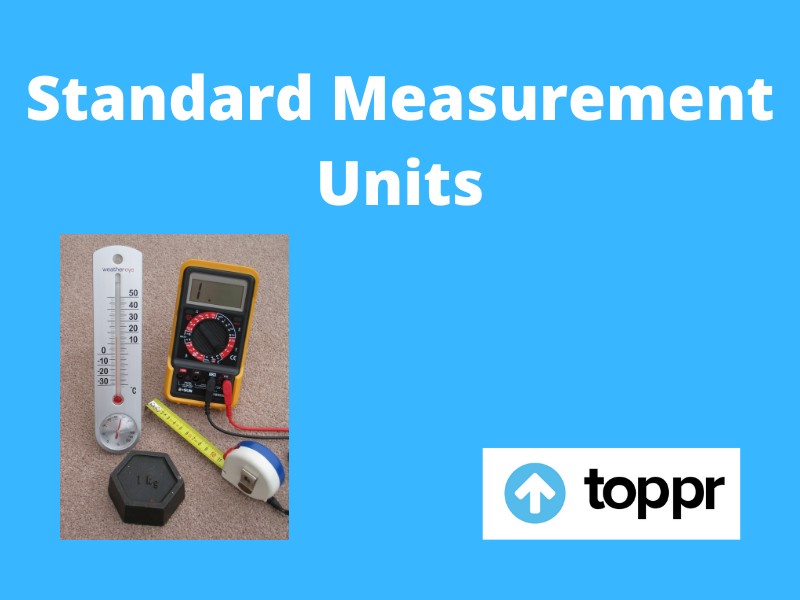 Imagine a situation where a man goes to a shopkeeper to purchase a product. However, the shopkeeper talks only in the English language while the man talks in the French language. Consequently, the shopkeeper is unable to understand anything because the man didn’t use a standard language.

Similarly, there are many systems and units in place for carrying out measurements of different quantities like volume, length, area, mass, and other things. For example, an acre, in India, commonly represents area measurement.

One acre is around 4046 square meters according to the metric system. This gives an idea of how difficult the situation would be if there was a lack of standard measurement units.

Traditionally, there was a lack of measuring devices with people to calculate standard measurement units. In order to solve this problem, people made use of the tools available at hand and came up with different innovative ways of measuring.

For example, they began to use the foot as a measurement of length. As such, 1 foot is around 0.3 meters which in turn is equal to 30 cm.

League was another measurement our ancestors made use of for length. So, one league was equal to the amount of distance that a person could cover when walking for an hour. This unit, however, is now obsolete and is no longer in use.

To tackle the problem of different systems of measurement, people came up with a system of units called the International System of Units. Furthermore, there has been the adoption of this system by most developed and developing countries.

The Metric system refers to the most common system of units that have been widely adopted. In maths lessons, students must learn to use metric units in order to carry out measurement of length, temperature, capacity, time, and mass (weight). Below are some of the standard measurement units that are part of the Metric system.

The Imperial system is also called British Imperial and it is a system that is prevalent in the United Kingdom. Students in the UK must learn how to carry out conversions between metric and imperial units. Below are some of the common Imperial units that are unique for this system:

Question 1: What are the SI unit prefixes?

Answer 1: The SI system utilizes a standard system of prefixes to the basic units that make them more relevant to relative magnitude. Use of prefixes takes place in order to identify the fractions or the multiples of the original unit. Furthermore, experts have agreed on twenty accepted prefixes.

Question 2: What is meant by dimensions of a physical quantity?

Answer 2: Dimensions of a physical quantity help in defining a quantity in some measurable terms by referring to its nature. Furthermore, the expression of the physical dimensions is in terms of length, mass and time, whose representation takes place by L, M and T respectively.