In every day to day life, objects around us are referred to predominantly using their weight. However scientifically weight is an entirely different concept. In fact, mass and weight are two terminologies that are often mistaken as an identical entity, which is completely false. Everything is made of matter as we all know. The primary three stages of matter are solid, liquid, and gas. The mass and weight of each state of matter vary. This is the reason why we require a detailed study of Mass and Weight. 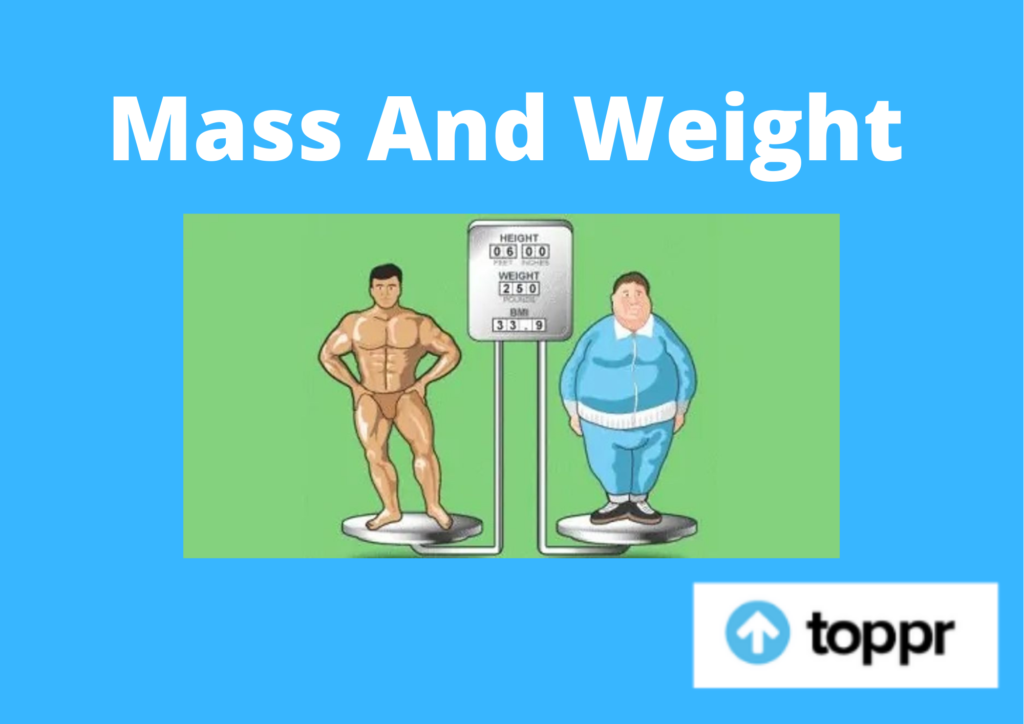 Introduction to Mass and Weight

Mass in simple terms is the amount of matter in an object while weight is defined as the force exerted on an object. Mass and weight can have a different form of expression based on numerous additional criteria.

For eg, we can assume that the weight of a ball is zero since it is floating on water. However, the weight is actually not 0 but instead, the property of buoyancy comes into play in this case. This is the reason why weight and mass needs a better understanding

Mass is defined as the combination of physical properties of an object and the resistance of the object to acceleration when force is applied.

The mass of an object can also include the total number of electrons protons and neutrons it contains. The Standard unit used to represent Mass in Kilogram and grams

Weight is defined as the force exerted on an object due to the gravitational pull.

We know that weight is equal to the product of mass and gravitational force applied.

So, W = MG where w is the weight, M is the mass, and G the gravitational force.

Hence, it can also be interpreted as ‘the weight of an object is directly proportional to its mass’.

Relation Between Weight and Mass

Based on Newton’s Second Law of Gravity it can be stated that,

Thus, an object of 1 kg mass will weigh 9.8 Newton

While taking off during a flight or going up in an elevator, we feel a sense of weightlessness.  However, it is a misconception that our weight reduces during that short span. The correct term used to interpret the situation is called “Effective Weight”.

This occurs because the floor exerts an equal and opposite amount of force on your body despite the presence of acceleration. Hence effective weight in this condition becomes 0.

FAQ on Mass and Weight

Question 1: What is the mass and weight of a person on Earth?

Answer 1: weight helps in finding the mass of a body based on the Formula of Mass that states, ‘ mass is equal to weight when divided by the acceleration of Gravity.

The acceleration of Gravity on Earth is 9.8 meters per Second sq and mass is measured in Newton.

Question 2: How does mass affect weight?

Answer 2: With the increasing size of the body due to age, the mass and weight increase simultaneously. Therefore we can state that increasing weight is directly proportional to the increasing mass.

Question 3: Can a body have mass but no weight?

Answer 3: W=MG where m stands for mass, g stands for acceleration due to gravity and w stands for the weight of a body. G is solely dependent on the gravitational pull of a planet which again is reliant on the mass of the planet at a given location.

The acceleration due to the gravity of Earth at the centre is 0, thus we can say W = Mx0.

So, we can say that even if a body has mass, its weight can be 0.

Question 4: Is Kilogram a weight or a mass?

Answer 4: Kilogram is the SI unit of mass