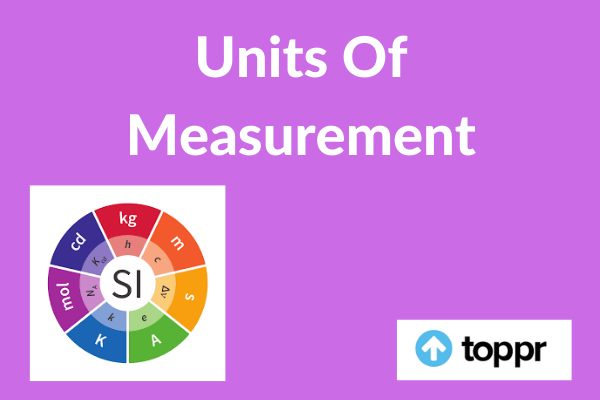 The worth of a physical quantity is usually expressed in two parts:

Example: We may express correctly the load of a box as 5700g or 5.7kg. the simple numerical figure 5700 or 5.7 doesn’t convey any meaningful information. Thus, it’s essential to incorporate units with every experimental value.

A unit is often defined due to the quality of reference chosen to measure any physical quantity. Naturally, we must have a convenient system of units for assigning numerical values to the measured or calculated values. Fortunately, it seems that it’s sufficient to define some basic units of mass, length and time since these are independent units and can’t be derived from the other unit these also are called fundamental units. The units for other quantities are often derived from these units and hence are called derived units.

In recent years the scientists have generally agreed to use the Systeme International d’Unites of units abbreviated as SI units. These units were adopted by the general conference of weights and measures in 1960. These are abbreviated as SI the designation comes from its French name system international.

The Systeme International d’Unites has seven base units are listed below. These base units pertain to seven fundamental scientific quantities and everyone other units are often derived from these.

It may be noted that the unit of temperature consistent with Systeme International d’Unites is Kelvin but still, Celsius scale of temperature is usually utilized in our lifestyle these two units are related as Kelvin temperature = \(^o{c}+273.15\)

Similarly, Angstrom is usually used as a unit of length in chemistry. It’s almost of equivalent size as the size of an atom.

Length Metre: The length metre is the length of the trail travelled by light in vacuum during a time interval of 1/299,792,458 of a second

Time Second: The second is the duration of 9,192,631,770 periods of the radiation like the transition between the 2 hyperfine levels of the bottom state of the caesium – 133 atoms.

Electric current, Ampere: The ampere us that constant current which, if maintained in two straight parallel conductors of infinite length, of negligible cross-section, and placed one metre apart in vacuum, would produce between these conductors a force adequate to 2×10 power-7 newton per metre of length

Amount of substance, Mole: The mole is the quantity of substance of a system which contains as many elementary entities as there are atoms in 0.012 kilograms of carbon -12.

The luminous intensity or Candela: The candela is the luminous luminosity intensity, during a given direction, of a source that emits monochromatic radiation of frequency 540×10 power 12 Hertz which features a radiant intensity therein direction of 1/683 watt per steradian.

Maintaining the National Standards of Measurement

The system of units also as unit definitions keeps it up changing with time. All modern industrialized countries have their national metrology institute (NMI) which maintains standards of measurement and suggest changes within the formal definition of that unit.

In India, the National Physical Laboratory, New Delhi establishes to understand the bottom units and derived units of measurement and maintains National standards of measurement. These standards are periodical inter – compared with standards maintained at other National metrology institutes within the world also like those established at the international bureau of standards in Paris.

The units of various physical quantities are often derived from the seven base units. These are called derived units because these are derived from the bottom units. For deriving these units we will multiply or divide the symbols for units as if they’re algebraic quantities.

For example to work out the quantity of a box we multiply the length, breadth and height as

Therefore the SI unit of volume is metre cube.

it’s going to be noted that a number of the units are named after the name of the scientist who did pioneering add the related field. For instance, the unit of energy is joule abbreviated as J and the unit of electrical charge is coulomb abbreviated as C.

The unit combination should be indicated by means of either a dot or leaving space in between, e.g. metre Kelvin may be written as: metre Kelvin = m.k or m k It should not be written as mk which stands for milliKelvin.

Symbols of the units do not have a plural ending ‘s’ .for example, we should write 10cm and not 10 cms.

After defining a unit of measurement for physical quantity, such as the kilogram or the metre, scientists select reference standards that help to calibrate all measuring devices. Then all devices such as analytical balance and metre sticks are calibrated by their manufacturers to give correct readings. However, each of these devices is standardized or calibrated against some standard reference.

For example, a kilogram is the mass standard since 1889 .it has been defined as the mass of platinum-iridium block stored in an airtight jar at the international bureau of weights and measures in France. Platinum – iridium was selected for this standard because it is highly immune to chemical attack and its mass won’t change for a particular while.

The SI units of a number of the physical quantities are either too small or overlarge. To change the order of magnitude, these are expressed by using prefixes before the name of the bottom units.

FAQs about Units of Measurement

Q.1. At what temperature have the Celsius and Fahrenheit read the same numerical value?

Answer. Let us find out the relationship between Celsius and Fahrenheit scale

Q.2.Fill in the blanks in the following conversions

a. The following are related to the conversion of one kilometre to millimetres and picometer:

b. The following expression indicates the conversion of one milligram to kilograms and nanograms

c. The following expression indicates the conversion of one millilitre to litres and decimeter cube