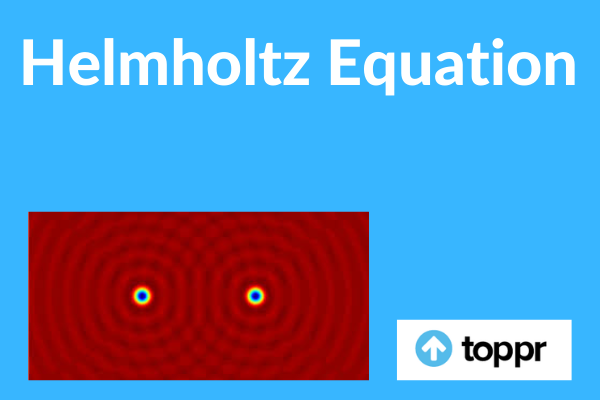 What is the Helmholtz Equation?

Here, \(\nabla^{2}\) is the Laplace operator, \(k^2\) is the eigenvalue and A is the eigenfunction. When the equation is applied to waves then k is the wavenumber. The Helmholtz equation has many applications in physics, including the wave equation and the diffusion equation. Also, problem-solving concepts like seismology, acoustics and electromagnetic radiation.

The derivation of Helmholtz equation is as follows-

This is the helmholtz equation

Few applications of Helmholtz equation are:

Seismology: It is the scientific study of earthquake and their propagating elastic waves. The study areas of seismology are tsunamis that are due to environmental effects and volcanic eruptions due to seismic source.

There are three types of seismic waves

Wave Mechanics: The wave equation in three dimensions gives rise to the Helmholtz equation in some situations. If we try to get a solution that has space and time variables separated, it results in a familiar Helmholtz form with respect to the spatial part. The standard methods to solve this form. Examples in which the Helmholtz equation are in use are vibrating membranes like drums and some other musical instruments, lasers, propagating sound waves, and earthquakes.

Quantum Mechanics: The cornerstone of non-relativistic quantum mechanics is Schrodinger’s equation. Schrodinger’s equation is an extension of the Helmholtz equation. In this equation, the right side of the equation has more than just the function A. The equation has an extra term, roughly corresponding to the time derivative of the function. Though the principles of solving the equation are similar. Specific steps are taken to make the solution work with the additional term.

Question: What is the Helmholtz function?

Answer: Helmholtz function is the thermodynamic function of a system. It is equal to the difference between the internal energy and the product of the system’s temperature and entropy.