Interference of waves refers to the phenomenon whose occurrence takes place when two waves meet while travelling along the same medium. Furthermore, the interference of waves makes the medium take on a particular shape. Moreover, the reason for this shape is due to the net effect of the two individual waves upon the medium particles.

Introduction to Interference of Waves

One can observe the interference effects with all types of waves, for example, gravity waves, radio, light, surface water waves, or matter waves. Furthermore, interferograms refer to the resulting images or graphs. The principle of superposition of waves explains that when two or more similar type propagating waves are incident on the same point, the resultant amplitude at that point happens to be equal to the vector sum of the amplitudes of the individual waves. 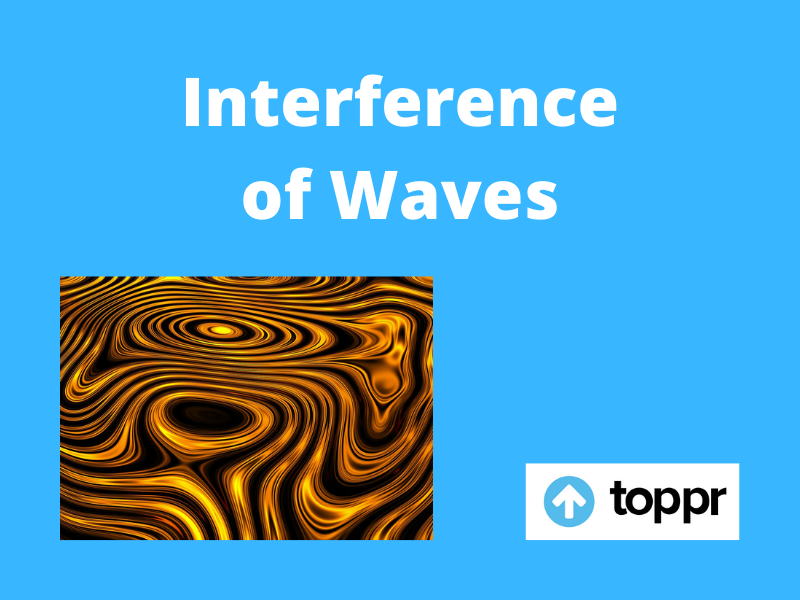 Derivation of Interference of Waves

In accordance with the principle of superposition of waves, if the meeting of a crest of a wave takes place with the crest of another wave of the same frequency at the same point, then the resultant amplitude turns out to be the sum of individual amplitudes. Furthermore, this concept is called constructive interference.

Similarly, if the meeting of a crest of a wave takes place with the trough of another wave, then the resultant amplitude turns out to be equal to the difference in the individual amplitudes. Furthermore, this concept is called destructive interference. Moreover, the derivation of the formula for the sum of two waves is as follows:

The expression of the amplitude of a sinusoidal wave travelling to the right along the x-axis is as,

Where A represents the peak amplitude. Furthermore, k = 2π/λ is the wavenumber and ω = 2πf refers to the angular frequency of the wave.

Take the case of another wave with a different phase travelling to the right but with the same frequency and amplitude.

The superimposition of the two waves takes place and they add; the expression of the resultant wave is shown by the equation,

The expression of the sum of two cosines is by the equation,

Solving equation (1) using the formula, one would get

FAQs For Interference of Waves

Question 1: What are the two types of interference?

Question 2: What is meant by the interference of light?