Earlier it was difficult to determine the behaviour of the particles as the particles with higher velocities were not studied. But Dirac equation came up with four new components to the wave. These four components are divided into two energy states i.e., positive and negative. Both energy states have a spin of 1/2 up and 1/2 down. 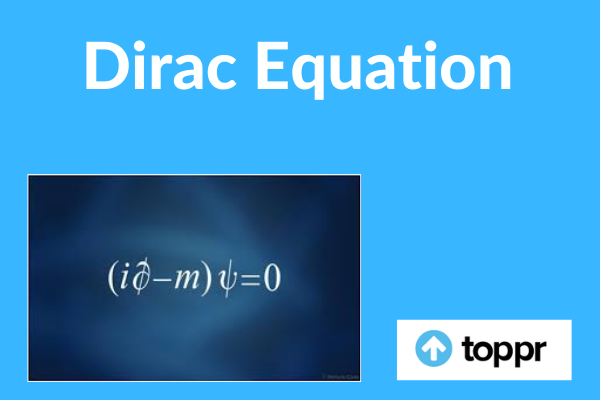 Here, S is the spin vector, q is the charge and m is the mass.

The Dirac equation is a relativistic wave equation in physics. It is derived by British physicist Paul Dirac in 1928. In its free form, it shows all spin-1/2 massive particles i.e., electrons and quarks for which parity is the symmetry. The equation is consistent with the principles of quantum mechanics and the theory of special relativity. It was the first theory to account fully for special relativity in the context of quantum mechanics. The equation was validated by accounting for the fine details of the hydrogen spectrum in a completely rigorous way.

The equation determines the existence of a new form of matter, antimatter, previously unsuspected and unobserved and was experimentally confirmed several years later. It also gives a theoretical justification for the introduction of several component wave functions in Pauli’s phenomenological theory of spin.

Though Dirac did not fully appreciate the importance of his results. The explanation of spin as a consequence of the union of quantum mechanics and relativity and the eventual discovery of the positron represents one of the conquests of theoretical physics. This accomplishment of the equation has been described as fully on a par with the works of Newton, Maxwell, and Einstein. With reference to quantum field theory, the Dirac equation is reinterpreted to describe quantum fields corresponding to spin. The Dirac equation was first given by P. A. M. Dirac in 1928.

M is the electron mass at rest

x, t is the spacetime coordinates

All these physical constants given are the reflection of special relativity and quantum mechanics. The purpose of giving this equation was to study the relative motion of the electron and also to treat the atom as consistent with relativity.

Question: What are the applications of the Dirac Equation?

Answer: The applications of the Dirac equation with an anomalous magnetic moment are for the description of characteristics of electrons, muons and quarks. In quantum mechanics, to resolve paradoxical features, the Dirac field has a major role. With the help of hole theory, the Dirac sea was studied. As a result, there are many negative charged electrons in the vacuum, and they are at eigenstate.