Frequency and wavelength are important characteristics of a wave cycle. Furthermore, wavelength refers to the distance between any two corresponding points on adjacent waves. Moreover, frequency is the number of waves that pass, in a specified amount of time, at a certain point.

Introduction to Frequency and Wavelength

Frequency and wavelength are crucial in carrying out various calculations regarding a wave cycle. Furthermore, frequency is referred to as the number of oscillations of a wave per unit time whose measurement takes place in hertz (Hz). Moreover, the frequency happens to be directly proportional to the pitch.

Wavelength refers to the distance that is present between two most near points in a phase with each other. Moreover, there is a separation of two adjacent peaks or troughs on a wave by a single complete wavelength’s distance. As far as the wavelength unit is concerned, its measurement takes place in meters, centimetres, or nanometers. 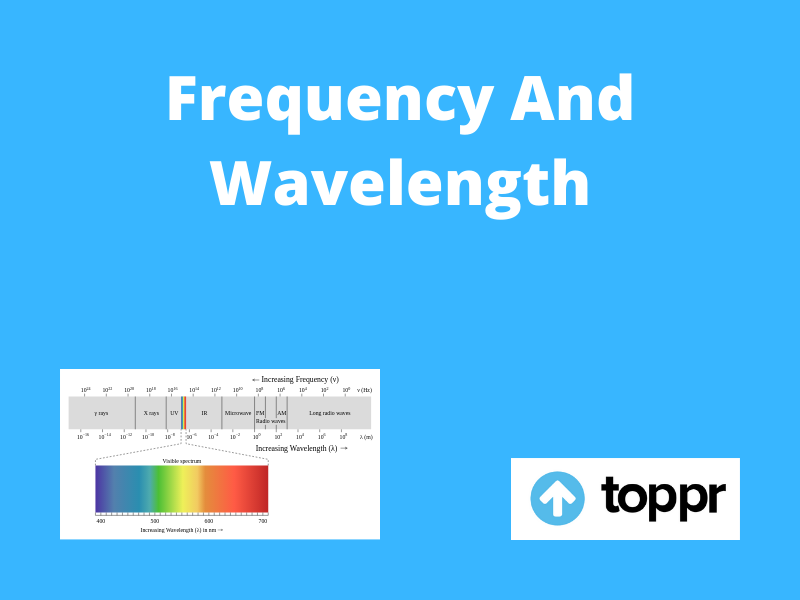 Relation Between Frequency and Wavelength

The treatment of a wave can take place with a higher frequency on a rope in a faster manner than before. During this, one may notice that the wavelength would become shorter. This shows that a certain relation between frequency and wavelength definitely exists.

Another quantity is Period (T) that one can use to describe a wave. Furthermore, one can define it as the time taken to complete an oscillation. Frequency helps in the determination of the number of times a wave oscillates and its expression can take place as:

After one second, every point on the wave returns to the same value. This is because a wave undergoes one oscillation during one period. Furthermore, this occurs as a result of every session of oscillation travelling a distance of a wavelength in one period to finish.

Experts define the wave speed (v) as the distance travelled by a wave per unit time. If one considers that the distance a wave travels is of one wavelength in one period,

As we know that T = 1/f, hence the expression of the above equation can take place as,

Formula For Wavelength to Frequency

The wavelength to frequency formula is below:

In terms of wavelength to frequency, the expression of the formula is as:

FAQs For Frequency and Wavelength

Question 1: What is the difference between frequency and wavelength?

Answer 1: When it comes to wavelength vs frequency, following are the major differences:

Question 2: Explain the working of a wavelength?

Answer 2: All points on a wave show a type of regular change which takes place in a particular value. For instance, when you make a wave by wiggling up and down, there is a repeatedly up and down movement of the rope molecules. Furthermore, on considering electromagnetic wave, change keeps happening in the value of magnetic and electric fields due to the wave at a point.

If the wave is not a short pulse, the change keeps on taking place in the value of electric and magnetic fields at any point. For example, two points on a wave which attain their maximum value show simultaneous oscillation in unison.