Energy is simply the capacity of an object to do work. Energy change occurs during most events and processes in the Universe. In all of these Energy, conservation is followed! Our Universe has a fixed amount of energy. Energy can neither be created nor be destroyed, it may change form. Here, we will learn about various forms of energy with a special focus on the energy conservation.

The capacity of an object to do work by virtue of its motion or position is its Mechanical Energy. It is the sum of the kinetic energy and potential energy. Since in most of the physical processes, we usually come across Kinetic and Potential energy only, we can use it to study energy conservation.

The ability of an object to do work because of its motion is called Kinetic Energy.  For example, the wind’s kinetic energy pushes the sail of a boat and the boat moves forward.  Flowing water has kinetic energy, and it has been harnessed to drive the grinders of flour mills for centuries.  Kinetic Energy is denoted by K and its unit is joules (J).  It is expressed as:

Potential energy can be defined as the capacity of an object to do work by virtue of its position.  For example, a stretched bow string possesses potential energy.  When the bowstring is released, it propels the arrow forward. Another example might be that of an object raised above the ground.  When the said object is released, it rushes downwards.

A compressed spring also possesses potential energy, when it is released, it expands with a force. Potential Energy is denoted by V and its unit is joules (J).  Here, we will concentrate on the potential energy of an object by virtue of its position with respect to the earth’s gravity.  Let us consider the following illustration: 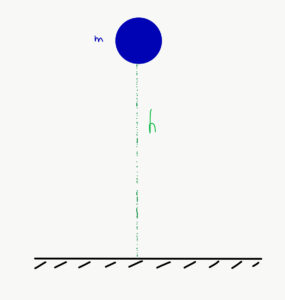 In the physical world, energy is transferred in many forms. Let us discuss some of these forms.

Heat energy is associated with the frictional force. For example, if we rub our hands together in the winter, they feel warm.  Similarly, the tip of a dentist’s drill gets extremely heated while drilling into a tooth.  So a cooling mechanism is incorporated in the drill that regulates the temperature by a jet of water.

Let us consider the following illustration where we consider an object in motion. Let us say that this object comes to a complete rest by virtue of the friction of the surface alone. We also notice that work done by friction, in this case, is negative. The frictional force transforms the kinetic energy of the block into heat energy. This heat energy increases the temperature of both the object as well as the surface.

Chemical energy can be most simply defined as the energy that binds together the atoms and molecules of various materials. When these molecular bonds are broken, a large amount of energy is released. For example, when we light a fire to some wooden logs, we break down the complex organic molecules, and their chemical energy is released. Basically, a chemical reaction is carried by the transaction of energy. On which basis there are two  types of reactions:

Nuclear energy binds together the protons and neutrons in the nucleus of each element. It is the strongest force in the universe. Nuclear bombs harness the nuclear energy of uranium and plutonium. The devastation of Hiroshima and Nagasaki at the end of the Second World War was caused by a minuscule amount of nuclear matter when compared to the traditional bombing materials. Nuclear reactions can be categorized into:

Law of Conservation of Energy

The law of energy conservation states that energy we can neither create nor destroy energy. Energy merely changes its form. For example, the kinetic energy of a moving object transforms into heat energy when the object comes to a full rest by the virtue of friction.

Einstein proposed that matter and energy are interchangeable and their relation can be expressed as E = mc². Here, E is the total energy of the matter, m is the mass of the matter and c is the velocity of light in vacuum. C is a constant at 300000000 m/s. Thus, a mere kilogram of matter has the equivalent energy of 9×1016 J or the equivalent annual output of a large power station (3000 MW capacity)!

Energy Conservation Under the Confinement of Mechanical Energy

Example: Suppose an object falls from a height Δx towards the ground. Evaluate the energy conservation in this system. Solution. Here, Δx is the displacement of the object under the conservative force F. By applying the work-energy theorem, we have ΔK = F(x) Δx

Since the force is conservative, the loss of potential Energy can be defined as ΔV = F(x) Δx