Energy is basically any object’s capability to perform work. It refers to something which we cannot create or destroy but only transform. When an object performs work, it loses its energy. Whereas, when the work is performed on it, it gains energy. We classify energy broadly as kinetic and potential energy. Kinetic energy refers to the energy which an object contains due to particular motion. Whereas, potential energy is stored energy due to its state of rest. It gets confusing between these two, so we will take a look at the meaning of potential energy.

You must know that an object has the ability to store energy because of its position. For instance, take a look at a bow and arrow. When you draw the boy, it stores a certain amount of energy. It is responsible for kinetic energy it gains when you release it. 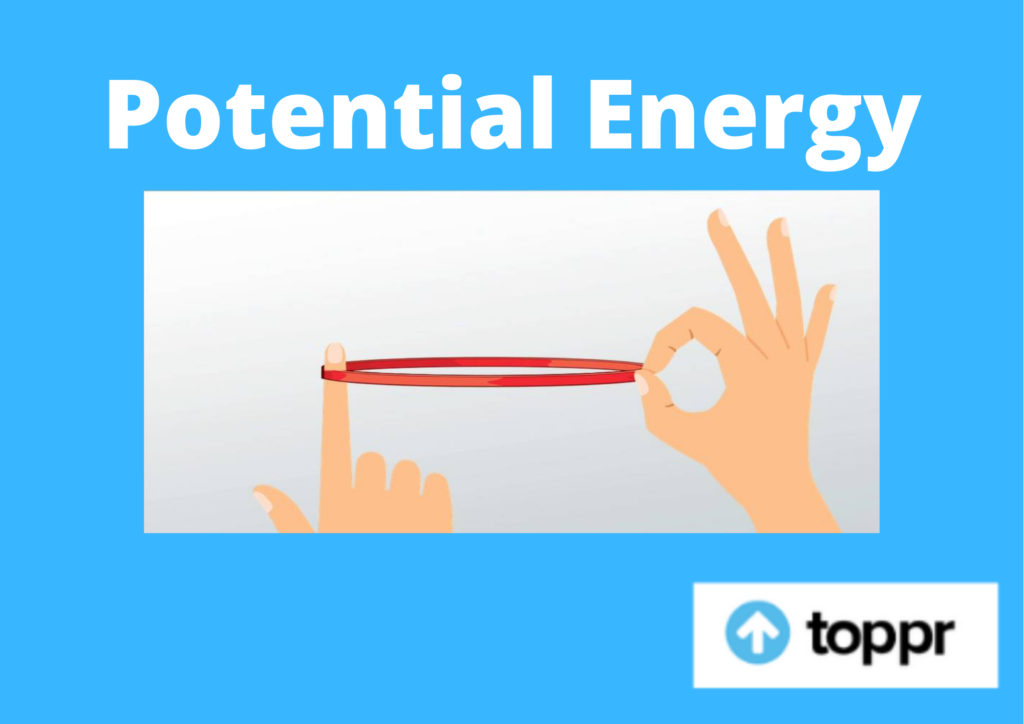 Potential energy refers to the energy which an object holds due to its position relative to other objects, stresses within itself, its electric charge, or other factors. Likewise, if you take the example of spring, it gains a certain amount of energy when we displace it from its equilibrium position.

You can observe this energy in the form of stress you feel in your hand when you stretch it. Moreover, you can define potential energy as a kind of energy which results when the position or state alters.

The Formula of Potential Energy

The formula for potential energy is dependent on the force which acts on the two objects. For the gravitational force the formula is:

Over here, m refers to the mass in kilograms whereas g is the acceleration because of gravity. Moreover, h refers to the height in meters.

We define this energy as the energy which an object possesses when it has risen to a particular height against gravity. In order to help you understand it better, consider an object of mass as m. It is positioned at a height h from the ground.

Thus, you will see that the force we require to raise the object equals the m×g of the object. Moreover, as the object is raised against the force of gravity, some amount of work (W) is done on it.

So, the potential energy formula will be: W = m×g×h = mgh

According to the law of conservation of energy, as the work is done on the object is equal to m×g×h, the energy which the object gains = m×g×h. Thus, in this case, it is the potential energy E.

So, the E of an object raised to a height h above the ground will be m×g×h.

Most noteworthy, gravitational energy is not dependent on the distance which the object travels, but on the displacement, which is the difference between the initial and the final height of the object.

Therefore, we will not consider the path along which the object has reached the height. So, looking at examples, you will notice that the gravitational potential energy for both the blocks A and B is going to be the same.

Moreover, many of the objects are particularly designed in a way so that they can store this energy. For instance, a stretched bow of an archer, a wind-up clock’s coil spring, a twisted rubber band which powers a toy plan and the board of a bent diver before he dives in.

Further, you will notice that an object which can store elastic potential energy usually has a high elastic limit. But, all elastic objects have a threshold to the load which they can sustain.

In other words, if we deform it beyond the elastic limit, the object will not be able to return to its original shape. We can calculate elastic potential energy by using the formula of U=12kx2.

You will notice that all tree branches high up the tree possess potential energy as they can fall at any time to the ground. Moreover, the food which we consume every day also comprises of this energy as it offers us the necessary energy for bodily functions.

The stones which you see sitting on an edge of a cliff possesses potential energy. If the stones fall, the potential energy will convert into kinetic energy. Further, a firecracker also possesses this energy as its chemical release when we light up its fuse.

Answer 1: A Scottish engineer and physicist, William Rankine, first used this term during the 19th century. Its concept dates back to Aristotle.

Answer 2: The food which we consume contains potential energy. As our body digests this energy, it offers us the needed energy for bodily functions. Further, tree branches contain this energy as they can fall to the ground.