We all have heard the stories of great explorers who sailed the unknown seas in their sailboats.  Those were the days before any engine was in existence.  They only relied on wind to move their huge ships. How does the wind move such objects? The answer lies in the principles of Kinetic energy.  In this article, we shall understand its basic principles and how can it equate to work. 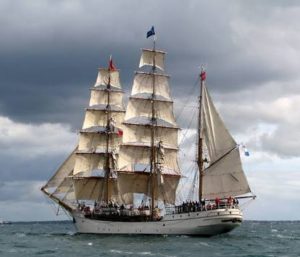 If you want to learn more about Kinetic Energy click here.

Consider an object with an initial velocity ‘u’. A force F, applied on it displaces it through ‘s’, and accelerates it, changing its velocity to ‘v’. Its equation of motion can be written as: v2 – u2 = 2as

Multiplying this equation by ‘m’ and dividing throughout by 2, we get:

Q 1: Which of the following kind of energy depends upon the mass and the square of the speed of a body?

Solution: A) The Gravitational Potential energy, Nuclear and Kinetic Energy all depend on mass. But out of the three only Kinetic energy is such that it contains the term with the square of velocity. So the answer is A.

Q 2: A rigid body of mass m kg is lifted uniformly by a man to a height of one metre in 30 sec. Another man lifts the same mass to the same height in 60 sec. The work done on the body against gravitation in both the cases are in the ratio:

Solution: B) Well whoever said anything about work depending on time, right? Work is independent of time as W = F.s doesn’t contain time (as long as the force is time independent!). So we can say that in this case, the work done will be similar in both cases and will present a ratio of 1:1.