You might have seen two billiard balls colliding with each other in the course of the game. This forceful coming together of two separate bodies is called collision. What happens after collisions? Can we determine the velocity or the trajectory of the colliding bodies? Let us find out!

What is a Collision?

Collision means two objects coming into contact with each other for a very short period. In other words, collision is a reciprocative interaction between two masses for a very short interval wherein the momentum and energy of the colliding masses changes. While playing carroms, you might have noticed the effect of a striker on coins when they both collide. 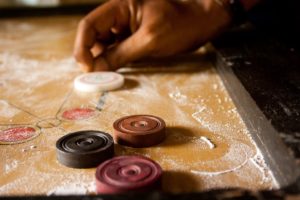 Collision involves two masses  m1 and m2. The v1i  is the speed of particle m1, where the subscript ‘i’ implies initial. The particle with mass m2 is at rest. In this case, the object with mass m1 collides with the stationary object of mass m2. 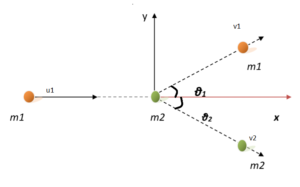 As a result of this collision the masses m1 and m2 move in different directions.

Generally, the law of conservation of momentum holds true in the collision of two masses but there may be some collisions in which Kinetic Energy is not conserved. Depending on the energy conservation, conservation may be of two types:

The conservation of Kinetic Energy says:

The Coefficient of Restitution

The coefficient of restitution is the ratio between the relative velocity of colliding masses before interaction to the relative velocity of the masses after the collision. Represented by ‘e’, the coefficient of restitution depends on the material of the colliding masses. For elastic collisions, e = 1 while for inelastic collisions,e = 0. The value of e > 0 or e < 1 in all other kinds of forceful interactions.

One dimensional sudden interaction of masses is that collision in which both the initial and final velocities of the masses lie in one line. All the variables of motion are contained in a single dimension.

Since the kinetic energy is conserved in the elastic collision we have:

When we use this value of  v1  in equation of conservation momentum we get :

When masses of both the bodies are equal then generally after collision, these masses exchange their velocities.

This means that the lighter body will bombard back with its own velocity, while the heavier mass will remain static. However, if m1 > m2 then v1 = u1 and v2 = 2u1

In inelastic one dimensional collision, the colliding masses stick together and move in the same direction at same speeds. The momentum is conserved and Kinetic energy is changed to different forms of energies. For inelastic collisions the equation for conservation of momentum is :

Since both the objects stick, we take final velocity after the collision as v. Now v shall be:

The kinetic energy lost during the phenomenon shall be:

The above figure signifies collision in two dimensions, where the masses move in different directions after colliding. Here the moving mass m1 collides with stationary mass m2. The linear momentum is conserved in the two-dimensional interaction of masses. In this case, we see the masses moving in x,y planes. The x and y component equations are:

For spherical objects that have smooth surfaces, the collision takes place only when the objects touch with each other. This is what happens in the games of marbles, carom, and billiards.

Solution: D) The mass of the object remains constant. To see the change in the momentum, we need to see the forces applied due to the collision. The only force applied to the sphere of mass ‘m’ is the normal reaction force due to the wall. This force has no parallel component along the wall. Therefore, the change in momentum in a direction parallel to the wall is zero.