If you transfer a certain amount of energy to an object in motion, what will happen to it? Can you measure the amount of energy in terms of work? How much work does it take to launch a satellite into space? Let us find out the Work-Energy Theorem and answer these questions!

The term “work” is used in everyday life quite frequently and we understand that it’s an act of doing something. For example, you are working right now on your grasp of Physics by reading this article! But, Physics itself might not agree on this. The Work-energy theorem explains the reasons behind this Physics of no work! 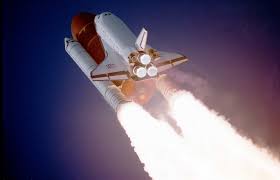 Work is said to be done when an acting force displaces a particle. If there is no displacement, there is no work done. You might get tired if you keep standing for a long time, but according to Physics, you have done zero work. Here, W is the work done in joules (J) and ΔK is the change in kinetic energy of the object. To learn how the Work-Energy Theorem is derived, we must first learn the nature of work as a scalar quantity and how two or more vector quantities are multiplied.

We will look at the Work-Energy Theorem in two scenarios:

Workdone Under a Constant Force

We have already learnt about the equations of motion earlier and know that,

We can substitute the values in the equation with the vector quantities, therefore:

If we multiply both sides with m/2, we get:

From Newton’s second law, we know that F=ma, hence:

Therefore, we have proved the Work-Energy Theorem. The Work done on an object is equal to the change in its kinetic energy.

Workdone Under a Variable Force

A constant force is rare in the everyday world. A variable force is what we encounter in our daily life. Proving the Work-Energy Theorem for a variable force is a little tricky. If we take one axis as the Force applied and the other axis as displacement, we come up with the following graph: 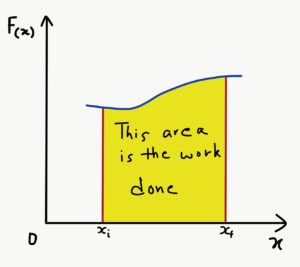 Here, x is the displacement. Now let’s divide this area into rectangles of infinitely small width along the x-axis: 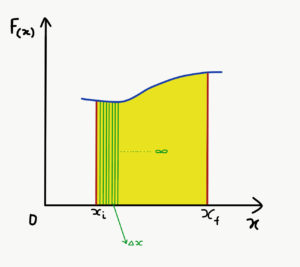 Here, for an infinitely small displacement of “delta x”, we can assume the force to be constant. Hence,

If we add all the rectangles in the second graph, we come up with the total work. It can be expressed as,

If total number of rectangles approaches infinity, the width of these rectangles along the axis x will approach zero,

Part one: Now we can define the work done as a definite integral of the force over the total displacement as

Now, we already know that kinetic energy of an object can be expressed as:

We can express the change in the kinetic energy with time as,

We know from Newton’s second law that acceleration is the change in velocity of an object with the rate of time. So the above equation can be alternatively written as,

Since F=ma and the velocity of an object is the change in displacement over a time rate, the above equation can be alternatively written as:

By cancelling out the time derivative from both sides of the equation, we get,

If we integrate the above equation along the x-axis of the second graph, we get,

The right-hand side of the above equation denotes the work. Hence we get:

Hence, the work-energy theorem is proved for the variable force as well.