This type consists of questions in which certain items belonging to different groups or possessing different qualities are given along with some clues with the help of which the candidate is required to group and analyse the given items and answer the questions accordingly.

Read the following information carefully and answer the questions that follow:

A is not a hill station.

B and E are not historical places.

D is not an industrial city.

A and D are not historical cities.

A and B are not alike.

Q4. Which city is a hill station and an industrial centre but not a historical place?

Q5. Which two cities are neither historical places nor industrial centres?

Read the following information carefully and answer the questions that follow:

(ii) The person who traveled to Delhi did not travel by boat.

(iii) R went to Bangalore by car and Q went to Calcutta by aeroplane.

Q1. Which of the following combinations of person and mode is not correct?

Q2. Which of the following combinations is true for S?

Q3. Which of the following combinations of place and mode is not correct?

Q4. The person travelling to Delhi went by which of the following modes?

Q5. Who among the following travelled to Delhi?

In this type of questions, some clues regarding seating or placing sequence (linear or circular) of some persons or items are given. The candidate is required to form the proper sequence using these clues and answer the questions accordingly. 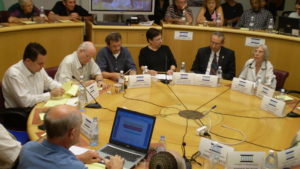 Read the following information carefully and answer the questions given below:

E is not at the end of any row.

D is second to the left of F.

C, the neighbor of E, is sitting diagonally opposite to D.

B is the neighbor of F.

Q1. Which of the following is sitting diagonally opposite each other?

Q3. Which of the following are in the same row?

Q4. Which of the following is in one of the two rows?

Q5. After interchanging seat with E, who will be the neighbors of D in the new position?

In such type of questions, clues are given regarding comparisons among a set of persons or things with respect to one or more qualities. The candidate is required to analyze the whole information, form a proper ascending/descending sequence and then answer the given questions accordingly.

Read the following information and answer the questions given below it:

There are five friends — Sachin, Kunal, Mohit, Amy and Rohan.

Sachin is shorter than Kunal but taller than Rohan.

Mohit is the tallest.

Anuj is a little shorter than Kunal and little taller than Sachin.

Q1. Who is the shortest?

Q2. If they stand in the order of their heights, who will be in the middle?

Q3. If they stand in the order of increasing heights, who will be the second?

Q4. Who is the second tallest?

Q5. Who is taller than Anuj but shorter than Mohit?

I think answer for first should be C(3)