A syllogism is a form of reasoning in which the conclusion is drawn from the given statements. Three Premise Arguments means that there are 3 statements and 1 or more conclusions. These are same as the two premise arguments. They are also represented in the form of Venn Diagrams. Below are a few examples of three premise arguments of definite conclusions as well as of that of possibility type of conclusions that will help you to understand these type of problems.

I. All A is C. This is one of the conclusions.

A) I, II and III are correct

B) Only I and II are correct

C) Only II and III are correct

D) Only I and III are correct 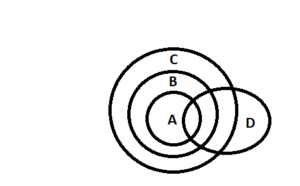 From the Venn Diagram, we can see that the conclusions I and III definitely follow. So the correct option is D) Only I and III are correct.

Possibilities are those conclusions which are not definitely true but they may or may not be true. We can take the same example here as we saw above.

III. Some D are A

I. All D are A is a possibility.

II. All C are A is a possibility.

A) Both I, II are correct

B) Only I is correct

C) Only II is correct

D) The data is not sufficient

Answer: We can solve this question by using the Venn Diagram. Hence the correct option is A) Both I, II are correct.

Other Types of Questions

I. All A is not B is a possibility

Answer: We can solve this question by the below Venn Diagram. The cross in the red designates the relation “are not”. We can say that since some A are B, not all A are B. The following Venn Diagram represents the statements present in the above question. 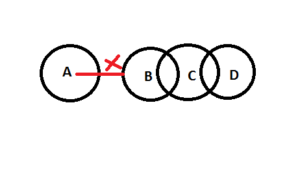 I. All Teachers are Lawyers

II. All Lawyers are Doctors

III. All Doctors are Engineers

I. Some Engineers are Lawyers

II. Some Doctors are Teachers

Ans: B) Both are correct

I. Some Trains are not Cars

II. Some Cars are Bikes

III. Some Scooters are Bikes

I. All Trains are not Cars a possibility.

II. Some Scooters are Cars.

Ans: C) I is correct