A Syllogism is a form of reasoning in which the conclusion is drawn from the given statements. Four Premises Arguments means that there are 4 statements and 1 or more conclusion. These are same as the three Premises arguments. They are also represented in the form of Venn Diagrams. Below are a few examples of four premise arguments of definite conclusions as well as of that of possibility type of conclusions that will help you to understand these type of problems

In the four premise arguments, we are given four sentences or statements. On these four sentences, a question is set up. Following the sentences, conclusions will be present. Your simple job is to study these four arguments and make a mental picture or a Venn diagram model of some situation. Then compare this mental picture or the Venn Diagram to the conclusions present in the question. You will have to select the right and the wrong conclusions from the options. Let us start by seeing the examples of the Definite conclusion type questions.

Definite conclusions are those conclusions which are definitely true from the given Premises. In other words, these conclusions have to or must follow from the logic defined in the premise arguments. For example:

Answer: Let us denote all the A’s, B’s, C’s, D’s and E’s with the help of ellipses and circles as below. Since all A’s are B’s, this means that the ellipse or the circle for A would be inside the ellipse or the circle of B. Similarly it follows for other cases. Now we have that some E are B. This means that only some portion of the set E will overlap with B and can thus be shown as below: 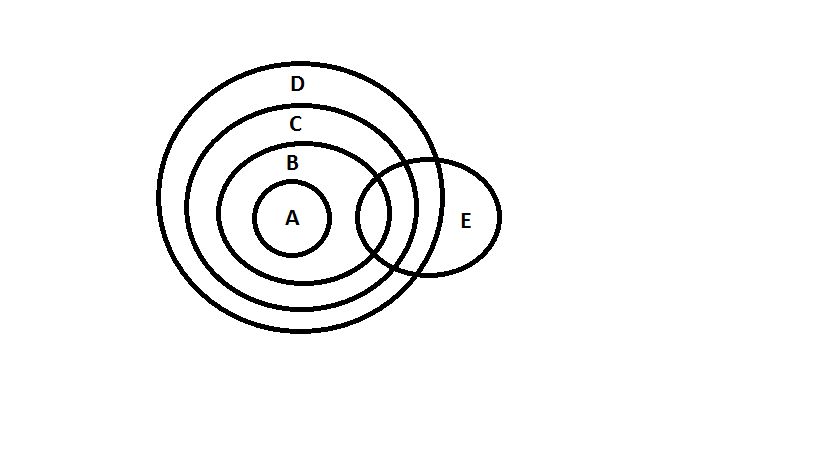 From the Venn Diagram, we can see that the conclusions i, ii and iii i.e. all A are C, all A are D, & some E are C will definitely follow. The conclusion iv does not follow because we do not know anything about the part of E which lies outside all the circles.

Possibilities are those conclusions which are not definitely true but they may or may not be true.

We can take the same example here,

1. All E being B is a possibility.

2. All D being A is a possibility

We can solve this question by using the Venn Diagram. 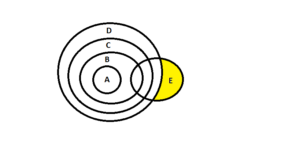 Other Types of Questions

We can solve this question by the below Venn Diagram 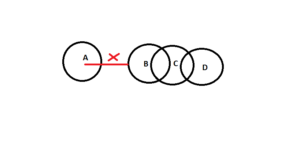 Here all conclusions i,ii and iii do not follow. Only conclusion iv follows.

For conclusion iii: It is given that Some D are A but we don’t have any direct relation between D and A so we cannot make any definite conclusion about them.

i. All Cats are Rats

ii. All Rats are Dogs

iii. All Dogs are Monkeys

iv. Some Horses are Rats

i. Some Horses are Dogs

ii. Some Dogs are Cats

i. Some Tables are not Chairs

ii. Some Chairs are Desks

iii. Some Pens are Desks

i. All Tables are not Chairs is a possibility.

ii. Some Desks are Tables.

Solution: Only Conclusion i. follows.