Did you know that not just metals but air expands on heating as well? But how? What makes air expand on heating? What is a land breeze? And what is a sea breeze? Let us know more!

Table of content
1 Suggested Videos
2 Introduction
2.1 Browse more Topics under Winds Storms And Cyclones
2.2 Activity I
2.3 Daily life examples where you can see the air expands on heating
2.4 What Causes Winds?
3 Questions For You

As a result, warm air rises up. On the contrary, on cooling the particles of air come closer to each other. Due to this, the volume of air becomes less, the air becomes more dense and heavier. This can be demonstrated by a simple activity. 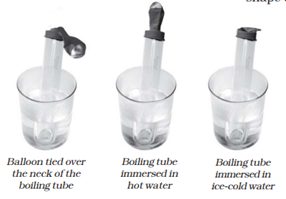 Let us learn Thunderstorms and cyclones in detail. Wind is caused due to uneven heating of the earth. Different parts of the earth receive the different amount of heat. The Equator receives direct sun rays due to which it gets more heated up as compared to poles where the sun rays are slanting. The air from the equator rises up and cold air from poles rushes towards the equator to take its place. This causes the convection current in air called winds. 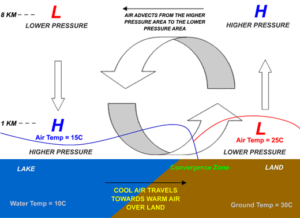 Q1. A fire alarm usually detects smoke in case of fire. Where should such an alarm be placed in a room?

Ans: (d) on the ceiling. This is because the hot air of fire will rise up towards the ceiling and will be easily detected.

Q2. A flag mounted on a flag post near the sea coast flutters in the direction of the sea. At what time of the day does this happen – at midnight or in the afternoon?

I wanna write on “All the Topics” ,So try to provide all of it