A very warm welcome to all the teachers and students present in the auditorium. I am here to deliver a speech on child labour. Child labour has been the most important concern in the world because it affects the children both mentally and physically. It also destroys the future of children. The Child labour act, 1986 defines a child as a person who has not completed the age of 14 years. Child labour is the practice of engaging the children in economic activity, on a part or full-time basis. Every child is considered as a gift of god it must be nurtured with care and affection with the family and society but due to the social-economic problems children will be forced to work in industries, leather factories, hotels, and a self-service restaurant. 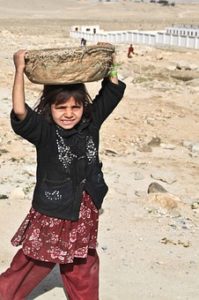 The child labour is not a small issue in economic problems of society so to eliminate child labour first we should focus on socio-economic issues of the society. India is one of the foremost countries in Asia that has 33 million children employed in various forms of child labour. The constitution of India, too provides certain rights to children and prohibits child labour like no child below the age of 14 years shall be employed in any factory or hazardous work, children are given opportunities and services to grow in a healthily, they will provide free and compulsory educations to all children between the ages 6 to 14 years, etc. There are many causes of child labour i.e. poverty, debts, professional needs, etc.

In developing countries, poverty is one of the major problems and the children were considered as helping hand to feed their families. If they don’t work they will die of poverty and hunger. Because of poverty, illiteracy and unemployment parents are unable to send them to schools. So that the poor parents send their children to work at lower wages. So first we will try to eliminate the poverty of society.

The poor economic condition of people in India forces them to borrow money. The literate seeks debt from money lenders during emergencies later they find difficulty in paying back the debts so debtors drag their children too in support of them so that the debts could be paid off. There are some industries such as the bangle making industries, where they require delicate hands and little fingers. Thus, they require children to work for them and do such dangerous work with glass.

I would like to conclude by saying that the remedy is only in the hands of the government. It needs to take the necessary steps to get rid of poverty by giving employment to the parents of child labourers. It is necessary to educate children. The government should allocate the necessary funds to educate poor children. There are many laws and authoritarian departments for child labour. But, up till now, these are unproductive in controlling ongoing child labour. This is possible only with the support of all the sections of the society and the law enforcement agencies.  The focus should be on controlling the population of the country, education of the children and providing sufficient funds for its removal from the gross domestic product of India.