Good morning to all teachers and students present here. I am here to deliver a speech on Indian culture. India’s rich vibrant culture is our identity as a nation. Be it religion, art, traditions, humanistic discipline or intellectual achievements- they need to make us an upscale, colorful, and diverse nation. This has withstood the tests of time. India was home for invasions, be it Greeks, Arabs, Mughals all of them have only added to its already rich culture. 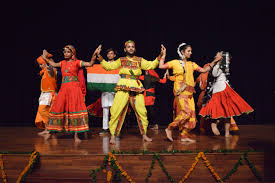 Today, India stands as a well-liked multicultural society because it has absorbed the better of every culture and moved on. People here follow different religions, customs, and traditions. People though turning modem today, hold on to the moral values, celebrate festivals consistent with customs and wear traditional clothes. We still learn lessons from the good Indian epics- Ramayana and Mahabharata. People still assemble in temples, gurudwaras, mosques, and churches.

Religion is a major component of Indian culture. Firstly, Indian origin religions are Hinduism, Buddhism, Jainism, and Sikhism. The core values of these religions are karma and dharma. Furthermore, many foreign religions are also present in India.

India celebrates numerous festivals throughout the year. These festivals are diverse due to different religious and cultural amalgamation in Indian society. Indians extremely value their festivals and celebrate them with joy and harmony.

Indians value the importance of family. In India joint family system is still flourishing. All the family members live together under one roof. The family contains the parents, children, children’s spouses, and offspring.

India is well known for its architectural masterpieces in the world. The foreign influences can be evident in Indian art and architecture due to various historical movements. From north to south, east to west, its culture is extremely much alive. We must not just believe what we see in urban malls.

The art and architecture of the cave temples (Ajanta & Ellora), the carved Gopurams, the Gumbads, the intricate work of art created as a symbol of eternal love (the Taj Mahal), the Jharokas of the palaces, the forts, and their splendors still attract us and foreigners.

Indian culture is always a source of inspiration for several writers. India is certainly a symbol of unity in the world. Indian culture is certainly very complex. In addition to this, the conception of Indian identity poses certain difficulties but despite this, a typical Indian culture does exist. Above all, these forces are a strong Constitution, universal adult franchise, secular policy, flexible federal structure, etc.

Indian culture is characterized by a strict social hierarchy. Probably, many Indians believe that gods and spirits have a task in determining their life. Earlier traditional Hindus were divided into four varnas. Now, this difference is declining.

Indian culture is certainly very diverse. Also, Indian children learn and assimilate within the differences. In recent decades, massive changes have taken place in Indian culture. Above all, these changes are female empowerment, Westernization, a decline of superstition, higher literacy, improved education, etc.

To sum it up, the culture of India is one of the oldest cultures within the World. Above all, many Indians till stick with the normal, Indian, culture in spite of rapid globalization. So, my friends, Indians have demonstrated strong unity regardless of the range among them. Unity in Diversity is the mantra of Indian culture.