Introduction to Tryst With Destiny

Tryst With Destiny – Jawaharlal Nehru came forward with the “Tryst with Destiny” speech, to the Indian Constituent Assembly in The Parliament. Furthermore, this speech took place on the eve of India’s Independence, at the hour of midnight on 14 August 1947. Moreover, Jawaharlal Nehru was certainly the first Prime Minister of independent India.

This great speech focuses on the aspects that transcend the history of India. Furthermore, Tryst With Destiny happens to be one of the greatest speeches of the 20th century. Moreover, this speech shows the essence of Indian triumph over British colonial rule. Whenever you listen to this speech, it fills you up with nationalistic pride and passion. 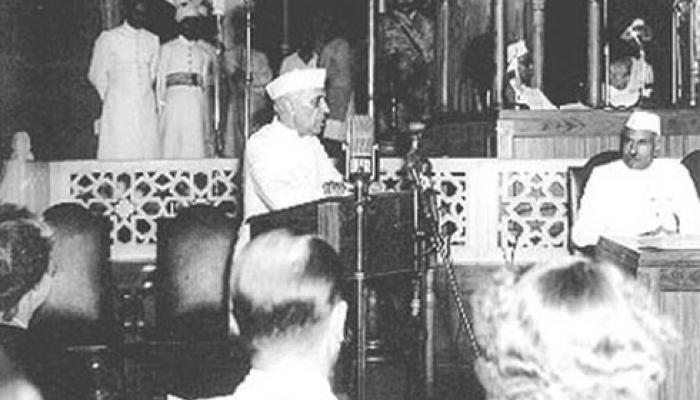 The struggle of independence for Indians had been going on for decades. Furthermore, Indians were trying very hard to free themselves from British colonial rule. Moreover, the biggest boost for the Indian independence movement came from the nonviolent movement led by Mahatma Gandhi.

The British kept the Indian efforts for independence in check by making use of ruthless military force. However, the Second World War changed everything.  This war really knocked the stuffing out of the British to maintain colonial rule. Add to that the absolute passionate and determined Indian independence movement.

As India was nearing independence, there arose a disagreement between Gandhi, Nehru, and Jinnah. Furthermore, this disagreement was regarding what should happen with India once the British left. Mahatma Gandhi, of course, was against the division of the nation.

After negotiation between the parties involved, India was divided into India and Pakistan. Finally, the country achieved independence after almost 200 years of British colonial rule. It was on the momentous occasion of 14th August 1947, midnight that Jawaharlal Nehru delivered this highly emotional speech, reflecting on the years of struggle for independence.

Unique Aspects of this Speech

There was only one political reference in the entire speech “Tryst with Destiny”. The only political element in the speech was Nehru’s intention to fight poverty and disease. Hence, Nehru makes the speech as ethical as possible. In the rest of the speech, Nehru takes time to properly summarize and explain what India is all about.

Nehru makes use of metaphors to explain the spectacular and poetic tale of India. Furthermore, Nehru refers to a country metaphorically as a “she”. It is a metaphor because the country is neither male nor female. Another use of metaphor by Nehru is when he says that “India will awake”.

Poetry certainly comes to mind when Indian independence is compared with a star of hope and freedom. There is a possibility that many metaphors get lost in the lyrics. Moreover, Nehru provides listeners with a clear image. Such a clear image certainly plants patriotic feelings in the heart of any Indian.

Something that will catch the attention of everyone who has at least some awareness of Indian history is the mention of Mahatma Gandhi. The amazing thing is that Nehru never speaks his name in the entire speech. Nehru refers to Mahatma Gandhi as the greatest man of our generation. Consequently, Nehru gives Gandhi a very high and special status in his speech.

Jawaharlal Nehru also mentions Mahatma Gandhi again as the architect of this freedom.  Furthermore, he also refers to him as the father of the nation. Also, Nehru says that Gandhi embodies the old spirit of India.

If you want to understand what India is all about in a brief manner, then you must listen to “Tryst of Destiny”. Furthermore, with these poetic words, Jawaharlal Nehru sends India into its first day of independence. These powerful words can move any Indian with emotion and tears.

Share with friends
Previous
How to Calculate Area of Triangle?
Next
Speech on World Environment Day for Students and Children