Most noteworthy, plants could not create energy without their presence. Students can learn more about the chloroplast structure and the functions here.

Meaning and Definition of Chloroplast

It is an organelle. It is unique to plant cells. And contains the very important chlorophyll.

Furthermore, chlorophyll is the reason why plants are green. Moreover, it is a vital component of the chloroplast structure. Further, it makes it possible for photosynthesis in plants.

It  occurs in only algal and plant cells. The derivation of the word is from the Greek language. The word khloros, means ‘green’, and plastes, means ‘formed’.

Moreover, they are highly dynamic in nature. They circulate and within the plant, cells are moved around. Furthermore, they tend to occasionally pinch in two for the purpose of reproduction. 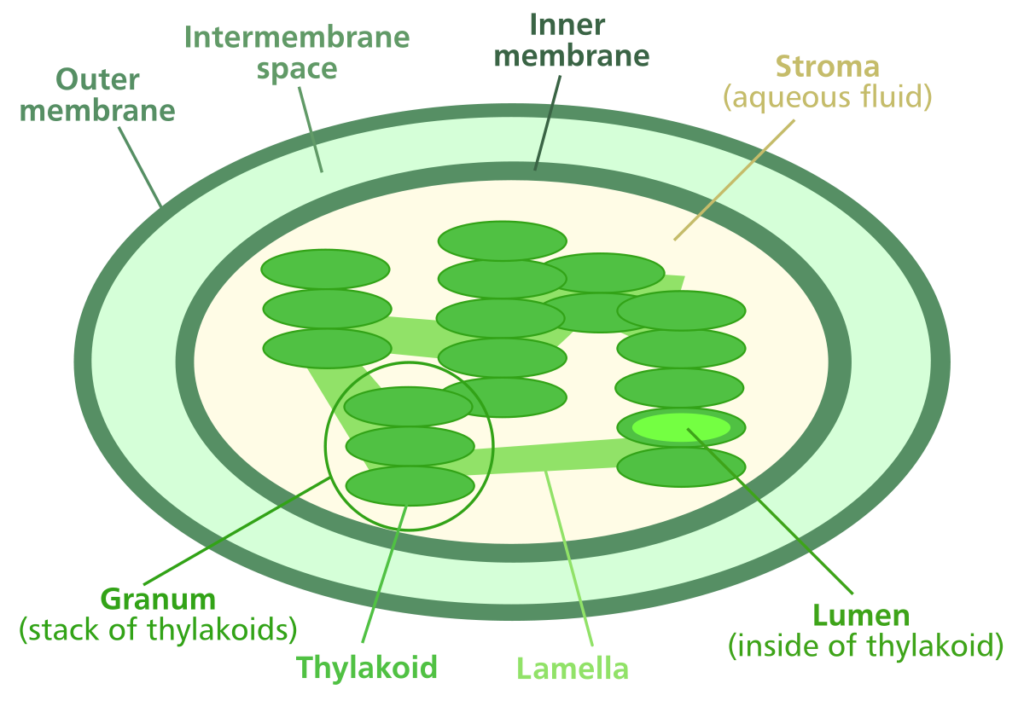 Outer one forms the external surface of it. Similarly, an inner membrane lies just beneath.

Furthermore, there is a thin intermembrane which exists between the outer and inner membranes. Stroma is the space within the inner membrane.

In vascular plants and green algae, there is a stacking of thylakoidss on top of one another. Furthermore, granum (plural: grana) is a stack of thylakoids.

The thylakoids involve chlorophylls and carotenoids, and light is absorbed by these pigments during photosynthesis.

The grouping of light-absorbing pigments takes place with other molecules such as proteins which results in the formation of complexes.

Also, these photosystems have roles in different parts of the light-dependent reactions.

In the stroma, enzymes produce complex organic molecules. They store energy in the form of carbohydrates. The stroma contains its own DNA and ribosomes. They are quite similar to those in the photosynthetic bacteria.

It is the form of sugar and other organic molecules.

Moreover, this energy stored in the form of sugar and other organic molecules is what the plant or alga uses as food.

Photosynthesis has two stages. In the first stage, reactions that depend on the light occur. These reactions form adenosine triphosphate (ATP, the energy currency of the cell) and nicotinamide adenine dinucleotide phosphate (NADPH).

It happens by capturing sunlight through chlorophyll and carotenoids.

In the Calvin cycle, the electrons which the NADPH carry, convert inorganic carbon dioxide to a carbohydrate organic molecule. Experts call this process as CO2 fixation.

Moreover, they are vital for the growth and survival of plants and photosynthetic algae. In fact, they take light energy.

Then they change it into a usable form just like solar panels. There are some plants that no longer have them.

One good example can be the parasitic plant Rafflesia. Thus, this plant gets its nutrients from other plants. Mainly, Tetrastigma vines. Since Rafflesia is a parasite plant.

Further, it has no need for its chloroplasts. Thus, this plant has lost the genes coding for the growth of it due to evolution.

Q1 Which of these is not true for chloroplast structure?

A. They are oval in shape
B. granum (plural: grana) is a stack of thylakoids
C. They have two membranes
D. Stroma is space within the outer membrane.

A1 The correct answer is D.