What will be your reaction, when you accidentally touch a hot, burning object? Naturally, your reflexes will kick into action and you withdraw your hand. You will not wait for some time and then move your hand slowly. Otherwise, your hand will get burnt! In such situations, your reactions are quick, involuntary and happen without much thinking. This is nothing but a reflex action.

Even though it is the brain that gives messages for muscles to act, in a reflex action, the spinal cord is the one that sends the messages to the muscles. Control and coordination in reflex actions are different. Our brain is a complex centre and the communication between the thinking part of the brain and other muscles is very intense. But, all this takes some time. This may not work well in sudden situations because even nanoseconds lost are crucial when communication happens between the brain and sense organs. Now, here is when the spinal cord comes into action.

When the body senses danger, the input-output of messages between the nerves and the corresponding action must be completed very quickly. The spinal cord sends the required signals to the muscles and the reflex action is completed. Since the action is instantaneous, the brain involvement is not much in reflex action.

Reflex actions happen through the reflex arc, which is a neural pathway that controls the reflexes. It acts on an impulse even before it reaches the brain. Some stimuli require an automatic, instantaneous response without the need of conscious thought. 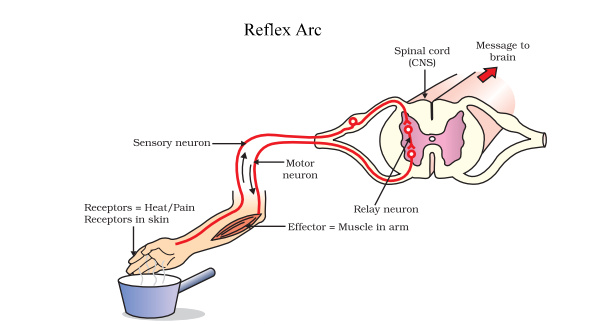 The receptor here is the sense organ that senses danger. The sensory neurons pick up signals from the sensory organ and send them through other neurons which are interconnected. It is then received by the relay neuron which is present in the spinal cord. Immediately, the spinal cord sends back signals to the muscle through the motor neuron. The muscles attached to the sense organ move the organ away from danger. In reflex actions, the signals do not travel up to the brain.

A Few Examples of Reflex Action

Q: What are receptors?

Ans: Specialised cells which react to a stimulus are called Receptors.

Q: What is a reflex arc?

Ans: A reflex arc is a path along which the nerve impulse travels from the receptor cells to the effector muscles.

Q: Differentiate between walking and any reflex action

Ans: Walking is a voluntary action that involves the exchange of messages between the brain and the leg muscles Reflex action, on the other hand, is an involuntary action in response to a stimulus that does not involve thinking.