Did you know there are approximately 100 billion neurons in a human brain? The brain and the spinal cord are composed of this neural tissue. Neural tissue is also called as the nervous tissue. This is a specialized kind of tissue in animals that puts them in the higher order of classification. Let us learn more about them.

What is a Neural Tissue?

The neural tissue consists of mainly the neurons and the neuroglia. The neurons or the nerve cells are highly specialized cells that have the ability to generate and also conduct nerve impulses. There are supporting cells in the form of neuroglia that help remove the debris, give physical support along with providing electrical insulation. 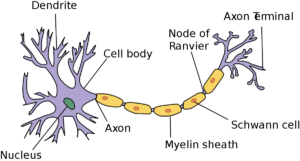 The dendrites are a type of motor neurons that have a large surface area. They are also short in length. The dendrites have a large area so as to receive signals from the other neurons. The incoming message is conveyed by the dendrite to the cell body. Therefore, they are called the receptive input region.

The cell body has a cone-shaped region, from where the axon arises. Axons are very long and thin. They are more wire like and can go up to several feet. This design of the axon helps in the reliable and quick transmission of information. The main function of the axon is to conduct the signals. It is mainly responsible for the generation and transmission of impulses away from the cell body.

The axon routes the nerve impulses from the cell body to other neurons or an effector organ. The axons can also have many terminal branches. The axon terminals that are present at the end of the axons are connected to other neurons.

Based on the functionality, the neurons are classified into three types. They are:

Based on the structure, neurons are again classified into the following:

Q. What is the role of neuroglia in the nervous system?