Did you know there are more nerve cells in your brain that there are stars in the universe? And these nerve cells transmit messages known as nerve impulses at the speed of 100 meters per second! Let us learn more about the nervous system and the transmission of nerve impulses.

The nervous system in human beings and animals is very complex. This system helps us react to stimuli and respond in the right manner. There is a constant exchange of information that occurs between the various parts of the body through the nerves and nerve cells.

The neurons, which are the functional unit of the neural system, have this amazing ability to detect, receive and also transmit the various kinds of stimuli. In scientific terms, the way these neurons communicate with each other is a nerve impulse. They are generally electrical signals that travel along the axon of the neuron.

The neurons communicate with each other at specific points or junctions called the synapses. These synapses can be chemical, communicating through chemical messengers or electrical, where there is a flow of ions between the cells.

The neurons are cells with some special abilities. These cells get excited, because of the membranes that are in a polarised state. Each neuron has a charged cellular membrane, which means there is a voltage difference between the inside and the outside membrane.

There are also different types of ion channels on the cellular membrane, which are selectively permeable to certain ions, present in the membrane of the neuron. Ions must pass through ion channels when they either enter or exit the neurons. These ion channels can be open, closed or inactive.

Before going into other details, here are some terms that you should know. 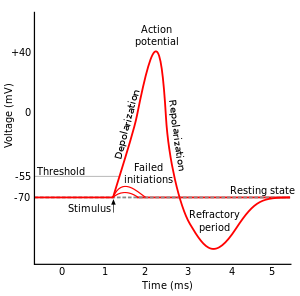 Generation and Transmission of the Nerve Impulse

A nerve impulse is generated when the stimulus is strong. This stimulus triggers the electrical and chemical changes in the neuron. As mentioned already there are different ions on either side of the cell membrane. The exterior side has sodium ions that are positively charged and are more in number.  The interior side of the cell is negatively charged with more potassium ions. Due to this difference in the charges, there is an electrochemical difference.

When a nerve impulse is generated, there is a change in the permeability of the cell membrane. The sodium ions flow inside and potassium ions flow outside, causing a reversal of charges. The cell is now depolarised. This depolarization results in an action potential which causes the nerve impulse to move along the length of the axon. This depolarization of the membrane occurs along the nerve. A series of reactions occur where the potassium ions flow back into the cell and sodium ions move out of the cell. This whole process again results in the cell getting polarised, with the charges being restored.

When the nerve impulse reaches the end of the axon, there are some chemicals released from the neurotransmitters. They diffuse across the synaptic gap, which is the small space present between the axon and the receptors. Nerve impulses can be transmitted either by the electrical synapse or the chemical synapse. 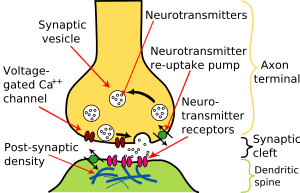 Q: What is synapse? What are the different types of synapses?

Ans. The junction between the axon terminal of one neuron and the dendrite terminal of the other neuron is called a synapse. A small gap called the synaptic cleft separates it. There are two types of synapses. They are electrical synapse and chemical synapse.