Human Digestive system includes Gastrointestinal Tract and other accessory parts like the liver, intestines, glands, mouth, stomach, gallbladder. There are 6 main functions of the Human Digestive System Process: Ingestion, Motility, Secretion, Digestion, Absorption, Excretion. The food that you eat gives you not only the required energy and nutrients to the body but also is used for cell growth and repair. 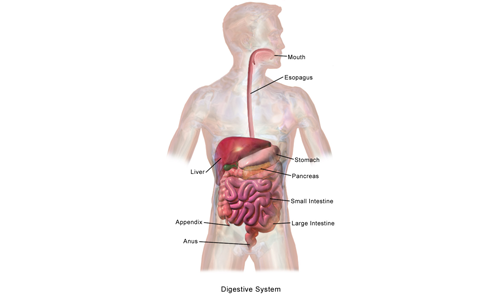 In Human digestive system, there are many parts that work together. The food that you eat has biomacromolecules, which are nothing but the carbohydrates (such as sugars), proteins, lipids (such as fats), and nucleic acids. These have to be converted to their simpler forms so that your body can absorb it. These biomacromolecules are the building blocks that you require to maintain your body, which is also made of these large biological molecules, along with water!

This process of converting complex food substances (molecules) into simpler forms to facilitate absorption is called Digestion. In humans, this system consists of many parts and organs, including the alimentary canal, digestive glands, and a few accessory organs such as the teeth, salivary glands, tongue, pancreas, liver, gallbladder etc.

Nevertheless, the starting point where digestion actually starts in the mouth! From the mouth, it passes through the alimentary canal, which is also called the gastrointestinal tract. This tract consists of the pharynx, esophagus, stomach, small intestine, large intestine, and anus. The mouth can be considered as the anterior opening of the alimentary canal, while the anus is the posterior opening. 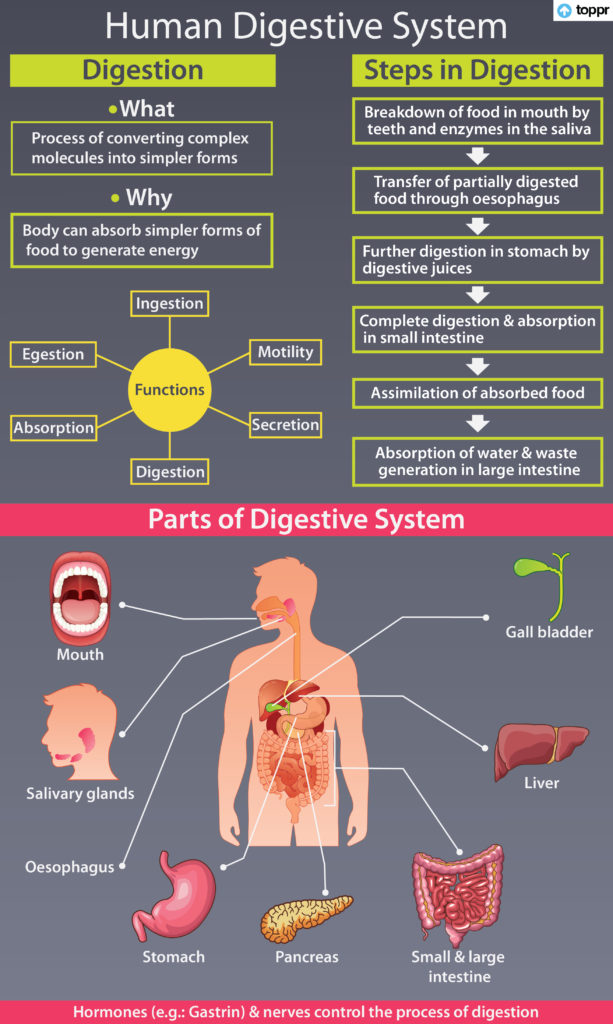 From the Mouth to the Large Intestine and Anus. The Human digestive system process can be divided into stages, namely:

The whole process starts in the oral cavity, where the saliva from the salivary glands mixes with the food and starts to begin the breakdown of food. From the mouth, the food passes to the hollow tube-like organ the esophagus. From the esophagus, food then travels to the stomach, where it breaks down further with the help of the acids and powerful enzymes secreted by the stomach.

The anterior opening of the alimentary canal is the mouth. It leads to a buccal cavity or oral cavity, where teeth, tongue and salivary glands are present. Here, ingestion, mastication, and swallowing of food occur. In humans, there are a total of 32 permanent teeth. There are four different types of teeth, namely, incisors, canines, premolars, and molars. These help in the chewing of food. 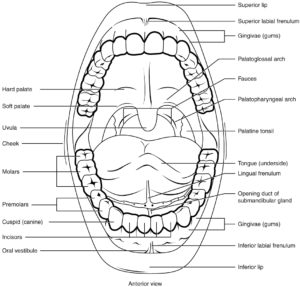 They are exocrine glands that produce saliva in the oral cavity. They secrete an enzyme called amylase, which helps in the breakdown of starch into maltose. There are three types of salivary glands, namely:

The esophagus leads to a sac-like organ called the stomach. It is a muscular, hollow organ, having a capacity of 1 litre. The stomach holds food and also is a mixer and grinder. It secretes strong acids and powerful enzymes that help in the process of breaking down of food. Food is generally in a liquid or pastes consistency when it leaves the stomach. These organs also play a significant role in the human digestive system. The pancreas secretes enzymes which help in the breakdown protein, fat, and carbohydrate. The liver secretes bile and cleanses and purifies the blood coming from the small intestine.  The gallbladder stores the bile that the liver produces. It releases bile into the small intestine to aid in the digestion process.

The large intestine is a long muscular tube that has different parts, which are caecum, colon, and rectum. The waste that is left over after digestion of food, reaches the rectum through the peristaltic movements of the colon.

Q: What is digestion?

Q: What are the various organs and parts associated with the Human Digestive System?

Ans. The Digestive System in humans starts with the mouth or oral cavity, leading to the alimentary canal. The alimentary canal consists of the following – pharynx, esophagus, stomach, small intestine, large intestine, and anus. The small intestine divides into three parts namely, the duodenum, jejunum, and ileum, while the large intestine divides into an appendix, caecum, colon, and rectum. The liver, gallbladder, pancreas, teeth, salivary glands, tongue, etc. also have a role to play in the digestive system.

Answer: Human digestive system involves gastrointestinal tract and other components such as liver, intestines, glands, mouth, stomach, gallbladder. The Human Digestive System Process has six primary tasks: ingestion, motility, secretion, digestion, absorption, excretion.
The food you consume not only provides the body the energy and nutrients you need, but it is also used to grow and repair cells.
The human digestive system begins with the mouth or oral cavity, which leads to the food channel. The food channel is made up of pharynx, oesophagus, stomach, small intestine, big intestine, and anus.
The small intestine splits the duodenum, jejunum, and ileum into three components, while the large intestine splits into an appendix, caecum, colon, and rectum.
In the digestive system, liver, gallbladder, pancreas, teeth, salivary glands, tongue, etc. also play a part.

Q.2 Water from the undigested food is absorbed mainly in the

A .Stomach
B .Food pipe
C .Small intestine
D .Large intestine
Answer: The large intestine, also known as the large bowel, is the last part of the gastrointestinal tract and of the digestive system.Water is absorbed here from the undigested food and the remaining waste material is stored as feces before being removed by defecation.
Hence water from the undigested food is absorbed mainly in the large intestine.
So,the correct answer is ‘Large intestine’.
Q3. What is the length of the alimentary canal in human beings? List out the parts of the gastro-intestinal tract in the correct sequential order based on the passage of food.
Answer: The alimentary canal in human beings extends from mouth to anus. In human beings, it measures about 8 to 10 meters in length. Gastro-intestinal tract can be divided into upper tract and lower tract. The upper gastro-intestinal tract includes oral cavity, pharynx, oesophagus, stomach and duodenum while the lower tract includes most of the small intestine and large intestine. The small intestine is further divided into duodenum, jejunum and ileum while the large intestine includes ascending colon, transverse colon, descending colon and rectum. The food passes through following organs in the sequence as given-oral cavity or mouth, pharynx, oesophagus, stomach, small intestine (duodenum, jejunum and ileum) large intestine (cecum, colon, rectum) and anus.
Q.4  The part of digestive system where no digestion occurs
A .Duodenum
B .Esophagus
C .Stomach
D .Mouth
Answer: Digestion refers to the process where the food and liquid consumed by us are processed and broken down into the smallest parts that can be absorbed by the various parts of the human body.
Of all the parts of the digestive system, the connecting link from the mouth to the stomach is the esophagus. It is a muscular tube that moves the partially digested food from mouth to stomach for further digestion.
Hence, the esophagus is one part of the digestive system where no digestion occurs.
Therefore, the correct answer is option B.
Share with friends
Browse