What are enzymes and what do they do in our bodies? Enzymes are basically proteins that are produced by living organisms to bring about certain metabolic and biochemical reactions in the body. They are biological catalysts that speed up reactions inside the body. Let’s find out more about them.

Table of content
1 Suggested Videos:
2 What is the Structure of Enzymes?
2.1 Browse more Topics under Biomolecules
3 Types of Enzymes:
4 How do enzymes work?
4.1 Theory 1: Lock and Key Hypothesis
4.2 Theory 2: Induced Fit Hypothesis
5 What factors affect enzyme activity in the cell?
6 Solved Example for You

What is the Structure of Enzymes?

Enzymes, as mentioned above, are biological catalysts. While they hasten or speed up a process, they are actually providing an alternative pathway for the process. But, in the process, the structure or composition of the enzymes remain unaltered.

Enzymes are actually made up of 1000s of amino acids that are linked in a  specific way to form different enzymes. The enzyme chains fold over to form unique shapes and it is these shapes that provide the enzyme with its characteristic chemical potential. Most enzymes also contain a non-protein component known as the co-factor.

The biochemical reactions occurring in the body are basically of 6 types and the enzymes that bring about these reactions are named accordingly:

How do enzymes work?

Step 1: Each enzyme has an ‘active site’ which is where one of the substrate molecules can bind to. Thus, an enzyme- substrate complex is formed.

Step 2: This enzyme-substrate molecule now reacts with the second substrate to form the product and the enzyme is liberated as the second product.

This is the most accepted of the theories of enzyme action.

This theory states that the substrate fits exactly into the active site of the enzyme to form an enzyme-substrate complex. This model also describes why enzymes are so specific in their action because they are specific to the substrate molecules. 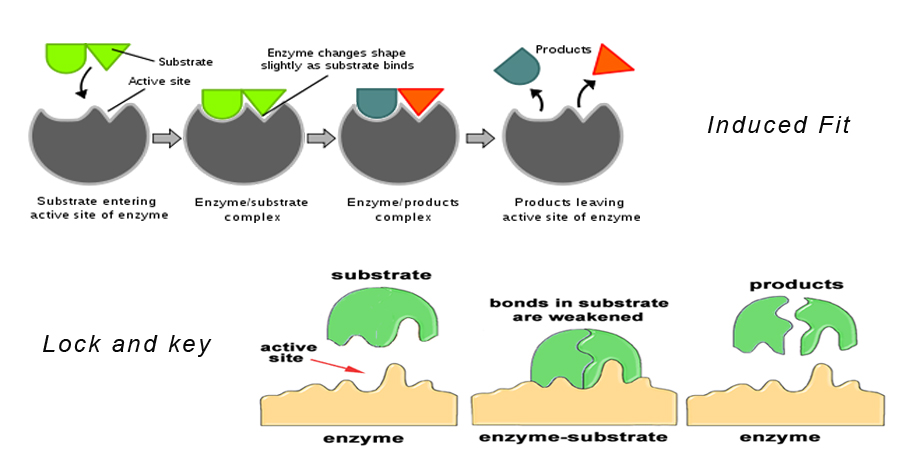 What factors affect enzyme activity in the cell?

Q: An enzyme acts by?

a. Increasing the energy of activation

b. Decreasing the energy of activation

Sol: a. Increasing the energy of activation