Below mentioned are some of the prime functions of the male reproductive organs: 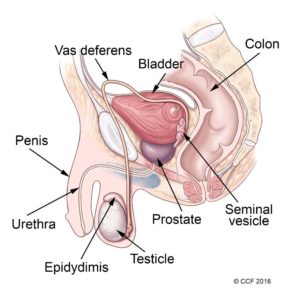 You can call it the male organ which is upfront during sexual intercourse. The penis consists of three parts; namely, the root, the body and the glans. It is important to note that, the glans or penis head is covered with a movable layer of skin. This is called the foreskin and is sometimes detached under a procedure termed as circumcision.

Further, the urethra opening, the semen and urine transport tube, is present at the penis tip. Also, the glans of the penis do comprise of several sensitive nerve endings.

The penis holds a cylindrical shape and includes three circular chambers. Each of these chambers is composed of distinctive, sponge-like tissue. Do note that, this tissue is made up of thousands of big spaces which are filled with blood whenever the male is sexually aroused.

Once the penis gets filled with blood, it grows erect and rigid; this allows or assists penetration while having a sexual intercourse. Since the penis skin is loose, it helps to accommodate variations in penis size in the course of an erection.

The sperm or reproductive cells are contained in the semen. It is ejaculated through the penis end when the male reaches orgasm or sexual climax. It is interesting to know that, the flow of urine tends to get blocked from the passage of urethra whenever the penis is erect. Hence, only semen is discharged at orgasm.

The scrotum is the loose sac-like skin bag which hangs below the penis. This part of the male reproductive system holds the testes or testicles, along with many blood vessels and nerves. Scrotum behaves like a temperature control system in regard to the testes. In order to achieve normal sperm development, it is necessary that the temperature of the testes should be somewhat cooler than the body temperature.

Testicles are oval organs which are almost the size of bigger olives which are present within the scrotum. These are secured at all ends by a structure termed as spermatic cord. Usually, most men have two tests.

It is a coiled tube which is long and is placed on the rear of each testicle. The function of Epididymis is to store and transport sperm cells which is created in the testes.

The ducts are formed due to the union of the seminal vesicles and vas deferens. Ejaculatory ducts gets unfilled into the urethra.

These are sac-like pouches which are linked to the vas deferens close to the bladder base. The fluid contained in the seminal vesicles are responsible for making up the maximum volume of a male’s ejaculatory fluid.

It is a walnut-sized assembly which is present under the urinary bladder. The function of the prostate gland is to contribute additional fluid for ejaculation.

You can call them as pea-sized structures which are present on the edges of the urethra right beneath the prostate gland. Bulbourethral gland produces a slippery, clear fluid which empties into the urethra.

It is a tube which carries urine starting from the bladder to travel outside the body. Considering males, the additional purpose of ejaculating semen at the time of orgasm is managed by urethra. Whenever the penis gets erect at the time of sex, the urine flow is blocked by the urethra.

Vas deferens is basically a muscular, long tube which initiates from the epididymis and travels to the pelvic cavity. Transportation of mature sperm is managed by vas deferens that leads to the urethra.

Q: How are sperms activated and nourished?

Ans: The semen is the primary fluid which helps in the nourishment and activation of sperm. It also transports the sperms to the female reproductive organ.