Have you ever given a thought to how a baby is born? How does it come into the real world? In order to understand all this, it is important to first gain knowledge about the female reproductive system in an elaborate manner. Let’s study about this very system that makes females the ‘child-bearer’.

The primary function of the female reproductive system is to produce the female egg cells which are essential for reproduction. These are called as the ova or oocytes. It is important to know that, the entire system is designed for transporting the ova to the exact fertilization site. Further, the fertilization process of an egg after interaction with sperm usually happens in the fallopian tubes.

The later phase of the fertilized egg is associated with getting rooted into the uterus walls. This is counted as the beginning of the early stages of pregnancy. In case fertilization or implantation doesn’t occur, then the system is aimed to menstruate. Moreover, the female reproductive system is responsible for producing female sex hormones which maintain the reproductive cycle. 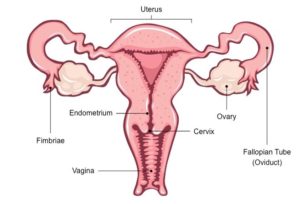 The female reproductive system comprises of parts which are both internal and external to the body.

The external parts of the female reproductive system include:

The internal parts of the female reproductive system include:

Ans: In the nonappearance of pregnancy, progesterone and estrogen levels drop. Hence, this causes contractions in the spiral arteries providing the endometrium. This further leads to the necrosis(localized death of living cells) of stratum functions and results in sloughing. Thus, the menstrual period initiates.

Share with friends
Previous
Up You Go
Next
Male Reproductive System