Transportation is an important phenomenon which will take place in all the higher organisms. In plants, materials of transport mainly include gases, water, hormones, minerals, organic material etc. through diffusion, active transport etc. Let us take a look.

Water gets absorbed by the root hair and gets transported inwards by different pathways till it reaches the xylem vessels. This continuous uptake of water creates a root pressure which pushes the water upwards. The pull created due to transpiration of water through the leaves causes the rising of water in the tall trees.

Minerals are also absorbed by the roots and transported upwards poet through the xylem along with water.

Organic compounds synthesized during the process of photosynthesis gets transported through the phloem sieve tubes. Such a transport of organic solute is called translocation. Biological membranes basically are hydrophobic in nature. Water soluble molecules like glucose, sodium ions and chloride ions cannot pass through the membrane as the lipids make it hydrophobic in nature. Transport of such substances is facilitated by transport proteins. These proteins are embedded in the bilipid layer. They provide the binding site for molecules to be transported.

Sometimes two different types of molecules move across the membrane simultaneously by the process of facilitated diffusion. When both kinds of molecules move in the same direction outside to inside or inside to outside, it is called symport. 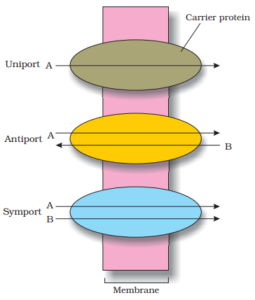 When they move in opposite direction it is called antiport. And when a particular kind of molecules moves across the membrane independent to other molecules, the type of diffusion is called uniport.

When the transport of materials are not spontaneous but involves an expenditure of energy, the type of transport is called active transport. This transport generally takes place against the concentration gradient. Active transport always leads to accumulation of molecules are ions towards one side of the membrane.

Active transport is carried out by membrane proteins. The protein uses the energy to carry the substance across the membrane. Certain pumps are generated which can transport the substance uphill from lower concentration to higher concentration. The transport rate is maximum when all the protein transporters are saturated. The carrier proteins are generally specific in action. They are also sensitive to an inhibitor.

Comparison of Different Types of Transport

Question: Identify a type of molecular movement which is highly selective and requires special membrane proteins but does not require energy.

Answer: The type of transport is facilitated transport.