We all have heard about bacteria and what they can cause. But, we know very little about different types of bacteria. In this topic, we will discuss one of those bacteria that are Cocci. Furthermore, we will also discuss its type in the topic. 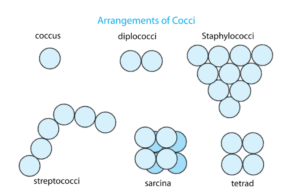 Generally, the bacterium has a spherical, round, or ovoid shape. Besides, bacteria are characterized on the basis of their shapes into three classes- Spirochetes (Spiral-shaped), Cocci (spherical-shaped), and bacillus (Rod-shaped) cells.

Moreover, Cocci or Cocus is a bacterium that contains multiple genera like streptococci or staphylococci. In addition, they can grow in pairs, cluster or chains depending on the attachment and orientation during cell division. Also, they don’t have flagella and are non-motile.

Rod bacteria (bacillus) are generally cylindrical or rod-shaped. On the contrary, coccus is round or spherical shaped. Rod bacteria examples are Bacillus subtilis (B. subtilis) and Escherichia coli (E. coli).

They are arranged in pairs which means that two coccus cells are connected. Furthermore, they can be gram-negative and gram-positive. Also, they can cause Pneumonia (Diplococcus pneumonia), Meningitis (Neisseria meningitides), and Gonorrhea (Neisseria gonorrhoeae).

Streptococcus Bacteria or streptococci are arranged in rows or in chains. Also, the chain or row varies in length.  Moreover, many of them are hemolytic which means they attack the red blood cell in the body. In addition, they are gram-positive bacteria that can cause many diseases that include scarlet fever, skin disorder erysipelas, pneumonia, rheumatic fever, tooth decay, and strep throat.

Staphylococci bacteria arranges in grape-like clusters of cells. Also, they are non-motile, have high salt tolerance, and are gram-positive. Moreover, their growth is normal in mucous membranes and skin. But, they can cause illness when initiated into normally sterile sites in the body. Furthermore, they can cause wound infections, toxic shock syndrome, abscesses, and most common food poisoning.

They are arranged in short chains or pairs and are also referred to as enterococci. Furthermore, they are non-motile, gram-positive and can be located in the enteric nervous system. Besides, they have limited potential to cause illness. But, they can cause bacteremia (bacteria in the blood), urinary tract infections, and wound infections.

Question. What is the shape of Cocci bacteria?