Heterotrophs refer to an organism that consumes other organisms available in the food chain. Furthermore, this organism is unable to create organic substances from inorganic substances. Students can learn more information about heterotroph here. 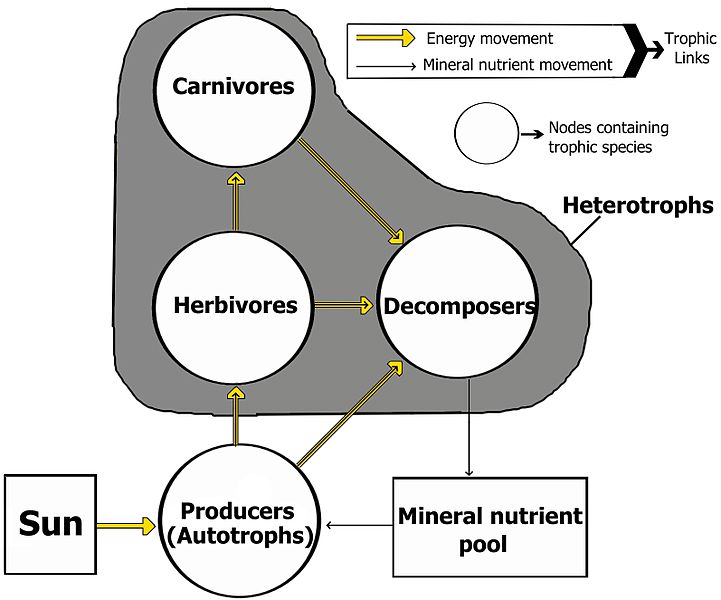 Definition and Meaning of Heterotroph

A heterotroph refers to an organism that produces its own food. Furthermore, such an organism relies on gaining nutrition from other sources of organic carbon. Moreover, these sources are mostly plant or animal matter.

Heterotrophs in the food chain are primary, secondary, and tertiary consumers, but certainly not producers. Moreover, heterotrophs among the living organisms include all the animals and fungi, bacteria, and parasitic plants.

The various types of heterotrophs are as follows:

Organotrophs – These heterotrophs indulge in exploiting the carbon compounds as the electron sources, like fats, proteins, and carbohydrates from animals and plants.

Chemotrophs – These organisms use the energy which is obtained by the process of oxidation of chemicals. Furthermore, this energy is obtained from the environment.

Phototrophs – This refers to heterotrophs that undertake utilization of light to gain energy and carry out the processes of metabolism.

Photoorganoheterotrophs – These organisms certainly synthesize the organic compounds by making use of sunlight along with the oxidation of organic substances, which include elemental sulfur, thiosulfate, hydrogen sulfide, and molecular hydrogen.

Most noteworthy, some examples of such organisms include rhodospirillaceae and purple non-sulfur bacteria. Moreover, such organism uses organic compounds to build the structures. Furthermore, they do not fix carbon dioxide and do not have the Calvin cycle.

Mixotroph – This is an organism that uses either organic carbon or carbon dioxide as carbon dioxide. Moreover, what this means is that mixotrophs have the ability to use the methods of both autotrophs and heterotrophs. Consequently, they can grow under both heterotrophic as well as autotrophic conditions.

There are many heterotrophs that use organic carbon as their source of carbon. Furthermore, the organic chemicals as their energy and source for electron.

Heterotrophs certainly function as consumers in the food chain. Moreover, they get nutrients from parasitic, saprotrophic as well as holozoic nutrients. Also, they indulge in breaking down complex organic compounds. Release of energy results by oxidizing carbon and hydrogen atoms that are available in carbohydrates, lipids, and proteins.

Respiration in heterotrophs is almost always accompanied by mineralization. Mineralization refers to the process of converting organic compounds into the forms of inorganic nature. Furthermore, when the organic nutrient used by the heterotroph contains very important elements. Moreover, these elements are N, S, P, C, H, and O.

Htereotrophs allow for dephosphorylation as something which is a part of decomposition. The conversion of N and S from their organic form to the inorganic is a vital part of the sulfur and nitrogen cycle. H2S results from desulfurization which is ultimately oxidized by lithotrophs and phototrophs.

Q1 Which of the following statements is not true in the case heterotroph?