We are generally under the impression that we only need oxygen to live. Well, you couldn’t be more wrong! There is a laundry list of elements that animals need for survival. One such element is Nitrogen. But we can’t just get nitrogen from the air. It needs to be converted to nitrates, via a process called nitrogen cycle. So let us learn more about this fascinating concept. 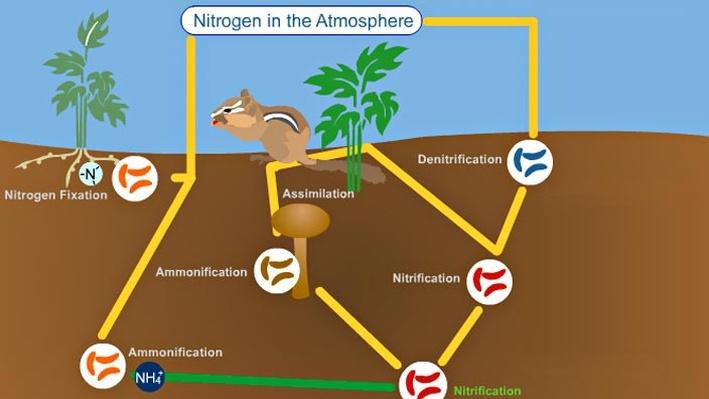 The air we breathe contains 78% nitrogen, 21% oxygen and remaining are other trace gases. The nitrogen component of air is inert. So this means plants and animals cannot use it directly. To be able to use nitrogen, plants convert atmospheric nitrogen to nitrates, nitrites and ammonia compounds by a process called the nitrogen cycle. Animals derive their nitrogen requirements from plants.

What are the steps involved in the nitrogen cycle?

It is important to note that microorganisms play an important role in each of these steps.

What is the mechanism of each of these steps?

This is the first step of the nitrogen cycle. This step is characterized by the conversion of atmospheric N2 into ammonia (NH3). Bacteria like Azotobacter and Rhizobium have a major role in this process. They are harbored in the roots of the leguminous plants and help convert inert nitrogen to ammonia. Nitrogen fixation can occur in any of the following ways: atmospheric fixation (involves lightening), industrial fixation(manufacturing ammonia under high temperature and pressure condition) 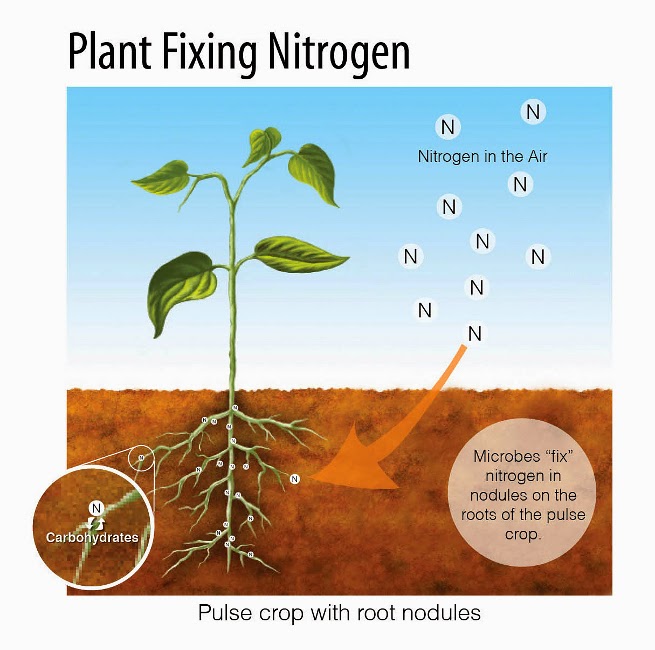 Once the nitrogen has been fixed in the soil, plants can absorb nitrogen through their roots. This process of absorption is known as assimilation.

This occurs in two-steps. The first step is in which NH3/NH$+ is converted to NO3- (nitrates). The bacteria Nitrosomonas and Nitrococcus present in the soil convert NH3 to NO2-, and another bacterium, Nitrobacter converts NO2- to NO3-. These bacteria gain energy through these conversions.

Is the reverse of nitrification that occurs in the deep layers of soil where the bacteria convert NO3- is converted into N2 and other gaseous compounds like NO2. This occurs because in deep layers of soil, oxygen is not available and the soil bacteria use these nitrogen compounds instead of oxygen.

What are some Essential Mineral Elements?

What is the importance of the nitrogen cycle?

Q: Nitrates are converted into Nitrogen by

Solution: The correct answer is “b”.  Denitrification is the process where after nutrients are converted back into ammonia, anaerobic bacteria will convert them back into nitrogen gas.

Q1. Explain nitrogen cycle in nature and define all the terms involved in it.

Q2. In nitrogen cycle, atmospheric nitrogen is fixed by bacteria and converted into ammonia. Ammonia is further converted into other forms of nitrogen. At the end of the cycle it returns to the atmosphere by the process of
A. Ammonification
B. Nitrification
C. Dentrification
D. Assimilation

Answer: The nitrogen cycle is the recycling phase of the nitrogen which includes nitrogen fixation, ammonification, nitrification, and denitrification. Denitrification is the process through which the nitrates and nitrites are converted back to atmospheric nitrogen. This process is performed by the anaerobic bacteria.
Thus, the correct answer is option C.

Q3. In nitrogen cycle which bacteria are responsible for nitrification?

Answer: In nitrogen cycle Nitrosomonas & Nitrobacter bacteria are responsible for nitrification) During nitrification, the nitrogenous wastes from dead plants and animals are converted into ammonia by the action of bacteria such as Bacillus ramosus, Clostridium spp. etc.
The microbes which carry out biological nitrogen fixation are commonly called biological nitrogen fixers. for eg: Rhizobium and Azotobacter.
So, the correct answer is ‘Nitrosomonas & Nitrobacter’.

Answer: A continuous series of natural processes by which nitrogen passes successively from air to soil to organisms and back to air or soil involving principally nitrogen fixation, nitrification, decay, and denitrification.