Also, they exist on earth from the Pre-Cambrian era and scientists find their remains in the fossil record of that time. Besides, they exist in the body of a human being too. The Protozoa that live on the human body are of two types. First is commensals which are normally not harmful and the second is pathogens that produce disease.

Most noteworthy, most of the diseases related to Protozoa happen inside the patient of AIDS (Acquired Immune Deficiency Syndrome). 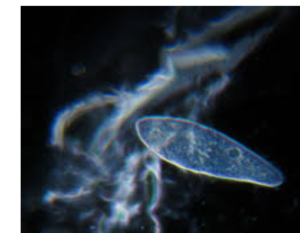 Protozoa is a parasite and in humans, they are less than 50 μm in size. Besides, the smallest is 1 to 10 μm long (intracellular form).  Furthermore, Balantidium coli can measure up to 150 μm.

They are unicellular eukaryotes. And just like other eukaryotic cells, the nucleus of it surrounds in a membrane. Also, the nucleus is vesicular, with scattered chromatin that gives a diffuse appearance to the nucleus.

Besides, all nuclei in the individual organism appear alike. Furthermore, one of the vesicular nuclei contains a central body that we refer to as karyosome or endosome. Moreover, the other nuclei of the nucleus contain the DNA.

In addition, the ciliates have a macronucleus as well as micronucleus that appear homogeneous.

Most noteworthy, the organelles of protozoa have similar functions just like the organs of higher animals. Also, the plasma membrane encloses the cytoplasm and also projects the locomotor structure.

Moreover, some protozoa have cytosome or cell mouth for the ingestion of food. Besides, protozoa are just like multicellular animals but in a single cell structure.

Protozoa pass through different stages of life throughout its life. Also, the stages differ in activity and structure. In addition, their life cycle revolves around feeding, multiplying (reproduction), growing and repeating the same process again and again.

The process of reproduction in protozoa can be sexual as well as asexual. Moreover, the most common type of asexual reproduction is binary fission in which the organelles duplicate inside the protozoan and then divide into two new organisms (protozoa).

Besides, Plasmodium, Apicomplexans, and Toxoplasma follow the sexual reproduction cycle that involves the production of gametes which then fertilize to form a zygote and so on.

Most noteworthy, some protozoa have a complex life cycle that requires two host species while others require only one host in their whole life cycle. Moreover, a single protozoan has the capacity to multiply itself much fold inside the body of the host.

Protozoa have holozoic nutrition it means that they require organic matter which can be a solution or particulate. Furthermore, they engulf their food or droplet with a temporary mouth after which their bodies perform the digestion and absorption of food vacuole and finally eject the waste substance.

Besides, many protozoa have a permanent mouth for the ingestion of food. Also, they have metabolic pathways similar to higher animals that require the same type of inorganic and organic compounds.

Question. How amoeba takes in its food through?

Share with friends
Previous
Micelles and Reverse Micelles - Definition and Formation
Next
Bacteria - Definition, Types, and Structure of Bacteria