Firstly, Aspergillus Niger is generally a haploid filamentous fungus that we use for waste management and also for the biotransformation. In addition to using it industrially, moreover, such as the production of the citric acid some extracellular enzymes. 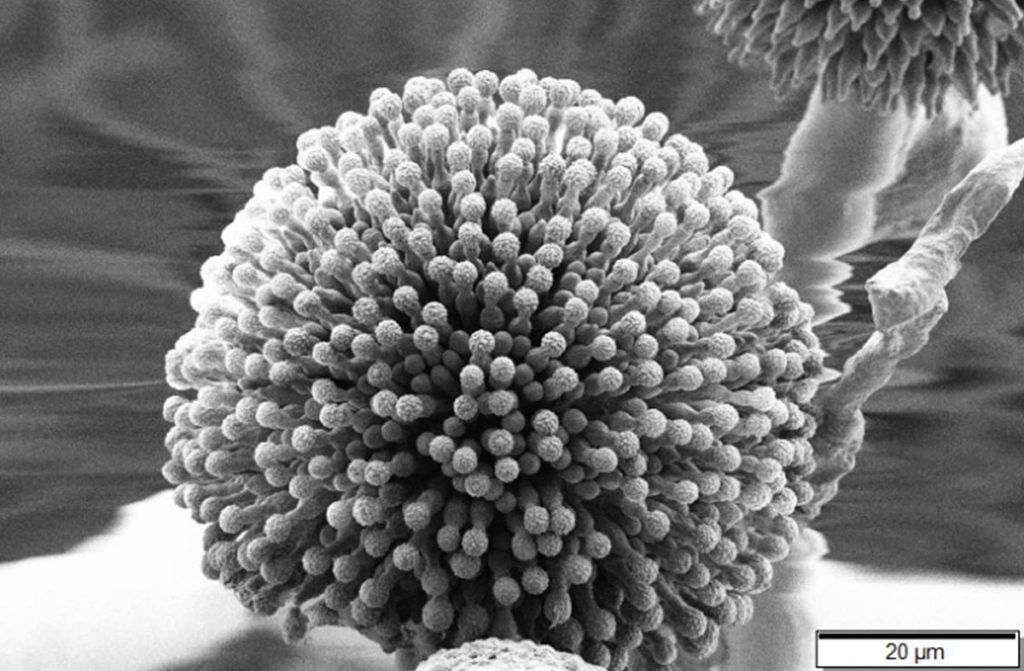 It is a fungus and one of the very common species of the genus Aspergillus. Furthermore, it can cause disease we call it black mold. However, this occurs in certain fruits and some vegetables like grapes, onions, apricots, and peanuts, however, it is a common contaminant of food. It is ubiquitous in the soil and it is commonly reported from the indoor environments. Moreover, its black colonies sometimes create confusion with those of Stachybotrys.

Few strains of A. Niger produce potent mycotoxins we call ochratoxins: some other sources disagree, claiming this report works on the basis of misidentification of the fungal species. Some recent evidence suggests some true A. Niger strains produce ochratoxin A. on the other hand, it also makes the isoflavone orobol.

Aspergillus Niger is cultured for the industrial production process of various substances. We use various strains of A. Niger in the industrial preparation of the citric acid and gluconic acid, these are acceptable for day to day intake by the world health organization. A. Niger fermentation is GRAS (generally recognized as safe) by the US food and drug administration under the Federal Food, Drug, and cosmetic act.

Production of many useful enzymes occurs with the use of industrial fermentation of A. Niger such as we use the A. Niger glucoamylase in the production of the high-fructose corn syrup. Pectinases are useful in the clarification of cider and wine. Alpha-galactosidase is an enzyme that breaks down some complex sugars. It is a component of the beano and other various products that decrease flatulence.

Moreover, Another use for A. Niger within the biotechnology industry is in the production of the variants that are containing a magnetic isotope of the biological macromolecules for NMR analysis.

Aspergillus Niger is also useful for the extraction of the enzyme, glucose oxidase, we use it in the design of glucose biosensors, due to its high affinity for the β-D-glucose.

We include it the Aspergillus Niger in aspergillus subgenus Circumdati, section nigri. The section nigri consists of 15 related black-spored species that may create confusion with A. Niger, which includes A. tubingensis, A. foetidus, A. Carbonarius, and A. awamori. A number of morphologically same species were in 2004 according to Samson et al.

In the year 2007, the strain of the ATCC 16404 Aspergillus Niger was reclassified as the Aspergillus brasilliensis. This needs an update to the United States Pharmacopoeia and the European Pharmacopoeia that commonly use this strain throughout the industry of the Pharmacy.

Disease in Humans and Animals

The aspergillus Niger is less likely to cause any human disease than some other Aspergillus species. In very rare cases, the humans get ill, it happens because of a serious lung disease that is aspergillus and can occur.

Ques. A girl who pricked her finger during pruning some rose bushes develops a local pustule that progresses to an ulcer. Several nodules then start developing along the local lymphatic drainage. The most likely agent is:

Share with friends
Previous
Definition of ATP - Structure and Formation
Next
What is Earth's Position in the Solar System?