You possibly know about a stem since you were a kid. Then what are we going to do now? We will know more about a stem! Stems play an important role in any plant. No, it is not just transportation of water and minerals! There is more to the story indeed! Let us look at the details of plant stems in this chapter. We will look at their characteristics and types as well. This is an important concept and will help you score better in your exams!

What is a Stem?

The stem is the ascending part of the axis bearing branches, leaves, flowers and fruits. It develops from the plumule of the embryo of a germinating seed. It bears nodes and internodes. What are nodes and internodes? The regions of the stem where leaves are born are called nodes. On the other hand, internodes are the portions between two nodes. 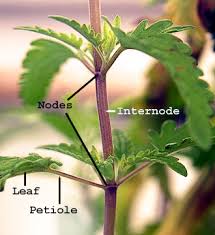 The stem bears buds, which may be terminal or axillary. Now, let us look at what the functions of a stem are.

Functions of the Stem

The stem performs the two major functions of

Learn more about the Morphology of Leaf and Fruits here.

However, many a time stems also have various modifications. These help the stem to perform the function of storage of food, support, protection and vegetative propagation. Before we proceed to know more about such modifications, let us look at the various characteristics of stems.

Now that we know quite a few things about stems, let us look at the various modifications of stems. This is an important aspect of this chapter. Hence, you must pay extra attention to it. 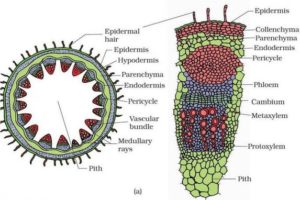 Too often, stems are modified to perform a range of functions. Below, we will discuss in brief about the various modifications of stems.

Thus, we see the characteristics and functions of the stem. We also went through the concept of various modifications of stems. A modification is important in various organs of the plants as they help to perform separate functions. At times, these functions are crucial for the existence of the plants.

Q1: Explain the modification in stems for vegetative propagation.

Ans: At times, the stems of the plants can be modified to serve various purposes. They include:

Q2: Ginger is a stem which can be differentiated from root because it:

Ans: A rhizome is a thick horizontally growing stem. It has nodes and internodes as well as scale leaves, axillary buds, adventitious roots and a terminal bud. Hence the answer is d.