Did you ever imagine how the various processes occur so smoothly inside your body? Every day there are loads of activities that are performed within your body in a systematic and coordinated manner. There is a control tower in your body, which is nothing but the nervous system. The neural system works in a coordinated manner so that all functions within the body are synchronized. For an efficient functioning of the entire system, the neural system is divided into central nervous system and peripheral nervous system. 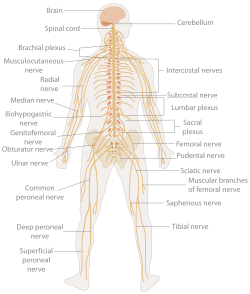 So, the main command center and the controlling system in our body is the brain. This is an organ that processes all the information. Even while you are reading this, it is your brain that is ultimately absorbing the information and storing it in the right compartment! The spinal cord is important as it conducts information to and from the brain.

The human brain is a complex tiny structure, weighing at just around 1.5 kg and having about 86 billion nerve cells. It controls all the body functions and senses. The functioning of the organs such as heart, lungs, etc. (involuntary movements) is all controlled and coordinated by the brain.

Apart from this, the brain also controls the voluntary movements, the circadian rhythm, maintaining the balance of the body, thermoregulation, human behavior, hunger, thirst, and many more. All your emotions, thoughts, memory, intelligence, and other senses of vision, speech etc. are controlled at this site.

The brain is a soft organ that is made up of delicate tissue that can be injured even with the slightest of pressure. Hence, it is encased well in the cranium/skull, covered by three cranial meninges or membranes. The space between the brain and meninges is filled up with a clear fluid that provides a cushion to the brain, protecting against infection. 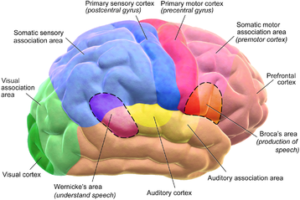 Parts of the Human Brain

Believe it or not, the human brain is nicely structured so as to perform its functions efficiently. There are three main parts of the brain that control different aspects of your body. The three parts are forebrain, midbrain, and hindbrain.

It has three main parts including the cerebrum, thalamus, and hypothalamus. The cerebrum occupies a major part of the human brain. It is the main thinking part of the brain and controls the voluntary actions. It processes sensory information collected from various sense organs. The cerebrum is divided into the left and right hemispheres by a deep furrow. Both these hemispheres are connected by the corpus callosum.

The cerebrum is associated with higher brain functions such as thinking and action. It has the cerebral cortex and other subcortical structures. The cerebral cortex is highly wrinkled and makes the brain very efficient. It has a high concentration of neurons giving it a greyish appearance and hence is called the grey matter.

The inner part of the cerebral hemisphere has fibres that are covered with a myelin sheath, which gives it an opaque white appearance. Hence it is called the white matter of the brain. The cerebral cortex is again divided into four division called lobes. They are:

The midbrain connects the forebrain and the hindbrain. It acts as a bridge and transmits signals from hindbrain and forebrain. The midbrain is associated with motor control, vision, hearing, temperature regulation, alertness.

It is the control center for visceral function. This part of the brain plays a role in controlling the heart rate, breathing, blood pressure, sleep and waking up functions etc.  The hindbrain has three parts, namely – medulla oblongata, pons, and cerebellum. The cerebellum maintains the equilibrium of the body, transfers information, makes fine adjustments to motor actions, coordinates eye movements etc.

The posterior part of the central nervous system is made up of the spinal cord, which is about 42 to 45 cm long. It controls the reflex actions and acts as means of communication between spinal nerves and brain.

Q. What is the grey matter and white matter in the Central Nervous System?

Ans. The Central Nervous System has the Grey matter, which is comprised of cell bodies and nerve fibres, which has a grey appearance. The white matter has myelinated nerve fibres which have an opaque white appearance.