In view of the coronavirus pandemic, we are making LIVE CLASSES and VIDEO CLASSES completely FREE to prevent interruption in studies
Home > Business Economics > Theory of Consumer Behavior > Consumers Equilibrium

By now, you are clear about indifference curves and the budget line. Let’s look at consumers equilibrium next. A consumer is in equilibrium when he derives maximum satisfaction from the goods and is in no position to rearrange his purchases.

In order to display the combination of two goods X and Y, that the consumer buys to be in equilibrium, let’s bring his indifference curves and budget line together.

In the following figure, we depict an indifference map with 5 indifference curves – IC1, IC2, IC3, IC4, and IC5 along with the budget line PL for good X and good Y. 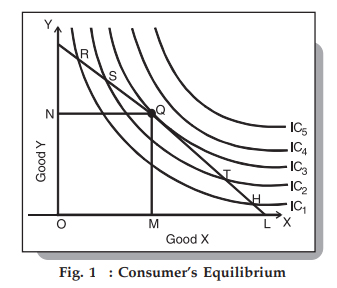 From the figure, we can see that the combinations R, S, Q, T, and H cost the same to the consumer. In order to maximize his level of satisfaction, the consumer will try to reach the highest indifference curve. Since we have assumed a budget constraint, he will be forced to remain on the budget line.

So, which combination will he choose?

Therefore, we are left with the combination Q.

What happens if he chooses the combination Q?

This is the best choice since Q lies on his budget line and pts puts him on the highest possible indifference curve, IC3. While there are higher curves, IC4 and IC5, they are beyond his budget. Therefore, he reaches the equilibrium at point Q on curve IC3.

Notice that at this point, the budget line PL is tangential to the indifference curve IC3. Also, in this position, the consumer buys OM quantity of X and ON quantity of Y.

Hence, at the equilibrium point Q,

Therefore, we can say that consumers equilibrium is achieved when the price line is tangential to the indifference curve. Or, when the marginal rate of substitution of the goods X and Y is equal to the ratio between the prices of the two goods.

Q: The indifference curve should be convex to the point of origin at the consumer equilibrium point. True or False?

Share with friends
Previous
Indifference Curve
Next
Elasticity of Demand