Alfred Marshall, British Economist defines consumer’s surplus as follows: “Excess of the price that a consumer would be willing to pay rather than go without a commodity over that which he actually pays.”

Hence, Consumer’s Surplus = The price a consumer is ready to pay – The price he actually pays

Let us take a look at an example of consumer surplus.

From the table above, we see that as the consumption increase from 1 to 2 units, the marginal utility falls from 30 to 28. This diminishes further as he increases consumption. Now,

Therefore, the consumer enjoys a surplus on all purchases until the sixth unit. When he buys the sixth unit, he is in equilibrium, since the price he is willing to pay is equal to the actual price of the unit.

The concept of consumer surplus is illustrated graphically as follows: 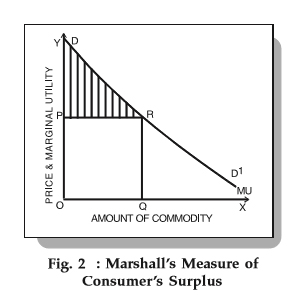 Next, if OP is the price of a unit of the commodity, the consumer is in equilibrium only when he purchases OQ units. In other words, when marginal utility is equal to the price OP.

In Fig. 2 above, the total utility is equal to the area under the marginal utility curve up to point Q (ODRQ). However, for price = OP, the consumer pays OPRQ. Hence, he derives extra utility equal to DPR which is consumer surplus.

Q: What are the two basic assumptions in the measurement of consumer surplus?

Ans: The basic assumptions are as follows,