One important factor of a valid contract is free consent. Both the parties involved in the contract must enter the contract willingly and under no pressure. There are factors which impair the free consent of either party. Once such factor is “mistake”, which includes a mistake of law and mistake of fact. Let us take a more detailed look into it.

According to section 14 of the Indian Contract Act 1857, free consent is defined as “consent is said to be free when it is not caused by coercion, under influence, fraud, misrepresentation, and mistake.” In the previous article about Free Consent, we have already covered the first four factors. Here we will be looking at the mistake factor.

A mistake is an erroneous belief that is innocent in nature. It leads to a misunderstanding between the two parties. Now when talking about a mistake, the law identifies two types of mistakes, namely 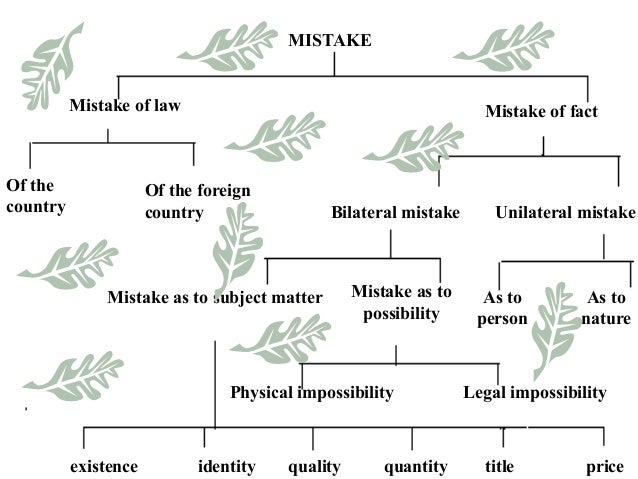 The Contract Act says that no party shall be allowed to claim any relief on the grounds of ignorance of Indian law. This will also include a wrong interpretation of any legal provisions.

Then there is the other type of mistake, a mistake of fact. This is when both the parties misunderstand each other leaving them at a crossroads. Such a mistake can be because of an error in understanding, or ignorance or omission etc. But a mistake is never intentional, it is an innocent overlooking. These mistakes can either be unilateral or bilateral.

When both parties of a contract are under a mistake of fact essential to the agreement, such a mistake is what we call a bilateral mistake. Here both the parties have not consented to the same thing in the same sense, which is the definition of consent. Since there is an absence of consent altogether the agreement is void.

However, to render an agreement void the mistake of fact should be about some essential fact that is of importance in a contract. So if the mistake is about the existence of the subject matter or its title, quality, quantity price etc then it would be a void contract. But if the mistake is of something inconsequential, then the agreement is not void and the contract will remain in place.

For example, A agrees to sell to B his buffalo. But at the time of the agreement, the buffalo had already died. Neither A nor B was aware of this. And so there is no contract at all, i.e. the contract is void due to a mistake of fact.

However, there are some exceptions to this. In certain conditions, even a unilateral mistake of fact can lead to a void or voidable agreement. Let’s see a few of these exceptions via some examples and case studies.

Q: A mistake of law always leads to a valid contract. True or False?

Ans: The statement is False. A mistake of India law if is regarded as a valid contract since ignorance of the law is not a good enough excuse. But a mistake of foreign law is considered as a mistake of fact, and if such a mistake is bilateral it will lead to a void contract.