A ratio is a simple mathematical term used for comparing two or more quantities that are measured in the same units. Whether it be a 4000000:1 contrast ratio formula for a new TV that you are buying, or a 16:9 aspect ratio of a movie you’re watching, we encounter ratios in our everyday life. Subsequently, we use ratios in proportion problems too you’ll encounter later on, which simply deals with the equality of two ratios. So let’s start understanding the basic meaning of ratios! 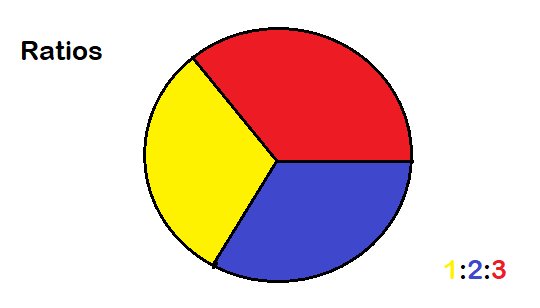 Ratios are the comparison of two quantities or more quantities (having the same units) that we express as a fraction. The concept of equivalent fractions allows the ratios of different physical quantities to be the same sometimes. Thus, a ratio is a general term independent of a unit and we use it across multiple platforms. Consider the following example –

⇒ A shopkeeper sells mangoes for 50 rupees per kg and buys them at a wholesale price of 30 rupees per kg. What is the ratio of his profit to the cost price per kg?

This is the fractional form of the ratio formula. We can equivalently express it as $$\frac{10}{15}$$
or any other equivalent fraction. But conventionally, we only use the reduced form of the fraction. Notation-wise, we then say that the ratio of the shopkeeper’s profit to the cost price per kg = 2 : 3

From this example, we can build up to mention the following properties and conventions concerning ratios –

Besides the above-mentioned properties of ratios, there are some particular types of ratios you do need to know about before you begin with problems –

When we compound/merge two or more ratios with each other through multiplication, the result is simply a compound ratio.
Consider two known ratios – a : b and c : d. Then the Compound Ratio of the two mentioned ratios is ac : bd.

If we compound a ratio a : b with itself once, it results in a Duplicate Ratio, which we give as a2 : b2. Similarly, we can write a triplicate ratio as a3 : b3. So, you can extend the concept to any exponent.

We give A Sub-Duplicate ratio of a : b as √a : √b. Similarly, you can also form Sub-Triplicate ratios by taking a cube root and so on. These ratios don’t come straightaway under the category of Compound Ratios but are analogous to the self-compounded ratios.

Ratios whose antecedent and consequent both, are only integers, is a Commensurate Ratios. For example, in the solved example that we solved above resulted in a commensurate ratio 2:3. Instead of such a simple ratio, if we get something like 3:Π or √2:5, then it is not a commensurate ratio.

NOTE: A ratio such as 0.75:2 may seem like commensurate ratios at first, but actually if you just multiply its fractional form by 4, you’ll get the resultant ratio 3:8. This indeed is a commensurate ratio. Thus, you have to be careful with some cases.