Foreign trade leads to division of labour and specialisation at the global level. There is no shortage of labour in India. That is one of the reasons Indian government promotes and stimulates policies and schemes to expand the Foreign Trade. Let’s see what measures does the government take to support Foreign Trade.

The government of India initiates different incentives and plans to help business firms enhance the competitiveness of their exports. The Government has likewise established a number of institutions to give infrastructural help and also marketing help to organizations doing International business.

Merchandise that is to be export is not conditional for payment of different excise, levy charges and customs duties. On showing verification of export of these products to the concerning authority such charge returns. Such refunds are ‘Duty Drawbacks.’

2. Export Manufacturing under the Bond Scheme

Under this freeway, organizations can manufacture merchandise without giving excise duty and different charges. The organizations can benefit this facility after giving an endeavour (i.e. bond) that they are producing commodities for the export goal.

3. Exemption from Payment of Sales Taxes

Merchandise manufactured for the sole reason of exporting is not conditional upon payment of sales tax. Money received from exporting operations has been absolved from giving of Income-tax for a long time now. This exemption is only available to 100% Export oriented units and units set up in Export Processing Zones / special economic zones.

In this government policy which permits the supplier duty-free supply of local and also in addition imported resources required for the manufacturing of export merchandise. The firms exporting irregularly can likewise acquire these licenses against particular export orders.

They are industrial domains, which shape enclaves from the Domestic Tariff Areas. These are generally located close to seaports or air terminals. They intend to provide an internationally competitive duty-free environment for export production at low cost. There are different measures, for example, availability of export fund, export promotion, capital merchandise scheme is in use for foreign trade promotion. 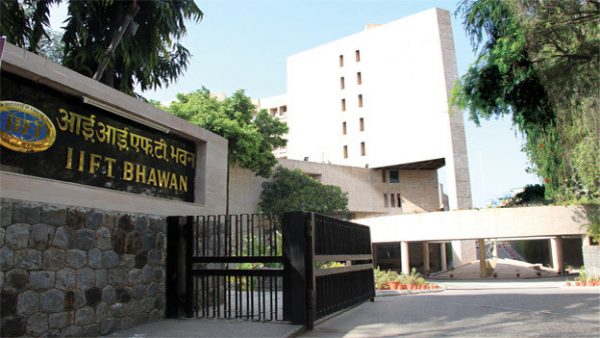 The government has set up from time to time various institutions in order to facilitate the process of foreign trade. Following are few of them.

Department of Commerce in the Ministry of Commerce, Government of India is the most authoritative body responsible for the country’s international trade and all jurisdiction linked with it. This might be in the shape of expanding business relations with other nations, state trading, export promotional measures and the development, and regulation of certain export-oriented industries and commodities.

The Department of Commerce formulates policies in the sphere of foreign trade. It also frames the import and export policy of the country in general.

Export Promotion Councils are non-profit institutions register under the Companies Act or the Societies Registration Act. The fundamental objective of the export promotion councils is to market and produce the nation’s exports of particular products falling under their jurisdiction. Currently, there are 21 EPC’s dealing with different commodities.

Commodity Boards are the boards which are the establishment of Government of India for the development of manufacturing of traditional merchandise and their exports. These boards are supplementary to the EPCs. There are seven commodity boards in India: Coffee Board, Rubber Board, Tobacco Board, Spice Board, Central Silk Board, Tea Board, and Coir Board.

Export Inspection Council of India is an establishment by the Government of India under Section 3 of the Export Quality Control and Inspection Act 1963. The council aims at the sound development of export trade through quality control and pre-shipment inspection.

The council is a vital body for managing the operations with standard control and pre-shipment inspection of merchandise for export. Exempting a few exceptions, all the merchandise destined for exports must be passed by EIC.

Indian Trade Promotion Organisation is an establishment under the Companies Act 1956 by the Ministry of Commerce, Government of India. Its head office is at New Delhi. ITPO was formed by the merger of the two government agencies, which are, Trade Development Authority and Trade Fair Authority of India. It’s objective is to support export organizations engaged in international trade fairs and exhibitions, etc.

Indian Institute of Foreign Trade is an establishment by the Government of India as an autonomous body in 1963. IIFT is registered under the Societies Registration Act with the prime objective of professionalising the country’s foreign trade management.

State Trading Organisation (STC) was established in May 1956. The main purpose of STC is to promote trade, primarily export trade among different trading partners of the globe. A huge number of local firms in India find it very difficult to compete in the global market.

In the meantime, the present trade routes are not suitable for the promotion of exports and bringing about diversification of trade with countries other than European countries.

The Indian Institute of Packaging is an establishment as a national institute mutually run by the Ministry of Commerce, Government of India, and the Indian Packaging industry and allied interests in 1966. Its base and prime laboratory are located at Mumbai and three regional laboratories are situated at Kolkata, Delhi and Chennai. It is a training-cum-research institute pertaining to packaging and testing.

Question: What are duty drawbacks?

Answer: Merchandise that is to be export is not subjected to the payment of different excise, levy charges and customs duties. Any such charges paid are returned to the exporter on showing verification of export of these products to the concerned authority. Such refunds are called duty drawbacks.