Our country is very vast and complex. Each year numerous government schemes or yojanas are announced that take care of the development and prosperity of the people of our country. Here we have a list of all these important yojnas. Let us see government policies & projects.

The objective of this yojna was to make financial services accessible and affordable.

It mostly targets people who are below poverty line and people who don’t have a bank account.

This Yojna was undertaken in 2014 on 11th of October. It provides insurance cover to rabi and kharif crops and also financial support to farmers in case there is any damage of crops.

Under this scheme, farmers will have to pay a uniform premium of 2% for all kharif crops and 1.5% for all rabi crops.

Make in India was an initiative started in 2014 on 27th September. The scheme focuses on job creation and skill enhancement in 25 sectors of the economy.

The initiative hopes to attract capital and technological investment in India.

This initiative was taken in the year 2015 on 22 January. It aimed at opening bank accounts for a girl child. Till she turns 14, money is to be deposited, the minimum deposit can be of Rs.1000 per year and maximum can be 1.5 lakh per year.

Launched in the year 2015 on 8th of April. This Yojna was started to provide funds to the non-corporate small business sector.

Loans of 50 thousand to 10 lakh can be availed under Sishu, Kishore and Tarun categories. Under this Yojna till now approximately Rs. 1 lakh crore loans are sanctioned.

PMJJBY provides life insurance cover to citizens. This Yojana is a government-backed life insurance scheme. The scheme is open and available to all citizens between the ages of 18 to 50 years.

Policyholders can get life insurance cover of Rs. 2 Lakh with an annual premium of Rs. 330 excluding service tax. 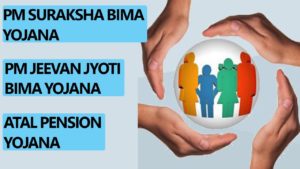 Launched in the year 2015 on 9th Of May. Its main Objective was to provide accidental insurance cover.

It is a government-backed accident insurance scheme, aimed at increasing the penetration of accidental insurance cover in India. The scheme is open and available to all citizens between the ages of 18 to 70 years.

The policyholder gets a life insurance cover of Rs. 2 Lakh with an annual premium of just Rs. 12 excluding service tax.

This scheme aimed at increasing the number of people covered under any kind of pension scheme. It is one of the three Jan Suraksha schemes. It especially targeted the private unorganized sector and citizens between the ages of 18 to 40 years.

The scheme also provides a monthly pension of Rs 1000 to Rs. 5000 per month based on the contributions made by the beneficiary.

The main objective of KVP was to provide safe and secure investment avenues to budding investors.

It is an investment scheme that promises that the invested money will get doubled in 8 years and 4 months. However, investors would not get any tax benefit for their investment in KVP.

This scheme was launched in the year of 2015 on 04 November. To reduce the reliance on gold imports over time and to lure tonnes of gold from households into the banking system were its main objectives.

Under the scheme, people can deposit gold into the banks and earn interest based on the value of the gold.

This project was initiated in the year 2016 on 16th of January. Its objective was to provide support to all start-up businesses. The start-ups can adopt self-certification to reduce the regulatory liabilities.

The initiative will also encourage young minds to come up with innovative ideas and create job opportunities in the country.

Indian government launched this app in the year of 2016 on 30th December. Its aim was to enable citizens to send and receive payments using any of the three modes UPI (Unified Payment Interface), AEPS (Aadhar Enabled Payment System) and USSD (Unstructured Supplementary Service Data) using the single BHIM app.

The Shyama Prasad Mukherji Rurban Mission (SPMRM)  aims to deliver integrated project-based infrastructure in the rural areas, which will also include the development of economic activities and skill development.

Launched in 2016 on 1st May from Ballia in Uttar Pradesh. The scheme aims at replacing the unclean cooking fuels mostly used in rural India with the clean and more efficient LPG (Liquefied Petroleum Gas).

Under this scheme, the government aims to provide LPG connections to BPL households in the country.

Q 1: The following is the main feature of the Pradhan Mantri Fasal Bima Yojana?

B) The start-ups can adopt self-certification to reduce the regulatory liabilities.

C) The scheme is open and available to all citizens between the ages of 18 to 70 years.

D) Farmers will have to pay a uniform premium of 2% for all kharif crops and 1.5% for all rabi crops.

Ans: D) Farmers will have to pay a uniform premium of 2% for all kharif crops and 1.5% for all rabi crops.