When one element may be a metal and therefore the other may be a non-metal, then two-element compounds are usually ionic compounds. Ionic compounds contain ions. The formation of the ionic compound occurs with the entire transfer of electrons from a metal to a nonmetal. After this, the resulting ions have achieved an octet. The protons don’t change. Metal atoms in Groups 1-3 loose electrons to non-metal atoms with 5-7 electrons missing within the outer level.

Production of ionic compounds is often from their constituent ions with the assistance of evaporation of their solvent, precipitation, freezing, a solid-state reaction. It also can include the electron transfer reaction of reactive metals with reactive non-metals, like halogen gases. Ionic compounds containing hydrogen ions (H+) are acids. And people containing basic ions hydroxide (OH−) or oxide (O2−) are bases. Ionic compounds without these ions also are referred to as salts and may be formed by acid-base reactions.

In some reactions between highly reactive metals (usually from Group 1 or Group 2) and highly electronegative halogen gases, or water, the atoms are often ionized by electron transfer. And, therefore, the process are often thermodynamically understood using the Born–Haber cycle. If the ionic compound is soluble during a solvent, we get as a solid compound by evaporation of solid solvent from this electrolyte solution. 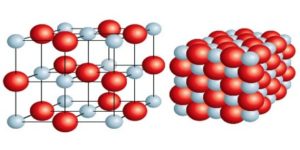 Ionic bonding isn’t directional in its purest form. It is often an easy positive-negative Coulombic attraction between point charges. This is often different from covalent bonding, during which electrons are shared by atoms, forming directional bonds. However, absolutely pure ionic bonding doesn’t exist. There’s always a minimum of a little degree of covalent bonding character in ionic compounds.

In an ionic compound, like common salt, NaCl, or magnesia MgO, the formula tells us the right ratio of elements present, but it doesn’t specify the unit. For an ionic compound to dissolve, the electrostatic bonds holding the ions in their rigid space lattice must get replaced by attractions between ions and solvent molecules. Each ion becomes surrounded by solvent molecules.

Elemental atoms generally lose, gain, or share electrons with other atoms so as to attain an equivalent electron structure because of the nearest rare gas with eight electrons within the outer level. This rule is the octet rule.

Q 1] Determine the formula of a compound formed by the reaction of sodium and fluoride.

Solution: Stepwise formulation of the compound is as follows,