A mole is a unit defined for the amount of substance. It is in the International System of Units (SI) and its short form is “mol”. It is the mass of that substance contains the same number of fundamental units such as atoms in 12.0 grams of 12 C. These fundamental units may be atoms, molecules, or formula units based on the substance. It is representing the number of chemical elements.  This article will define the mole and number of moles formula with examples. Let us begin it! 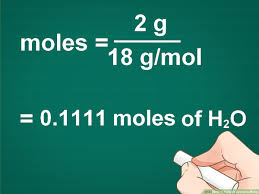 Table of content
1 Suggested Videos
2 Number of Moles Formula
2.1 What is a mole?
2.2 The formula for Number of Moles
2.3 Uses of Mole Concept
3 Solved Examples

What is a mole?

The mole concept is a simple and convenient method for expressing the amount of a substance in chemical applications. We may have the measurements into two steps, one is the numerical magnitude and the other is the units in which the magnitude is expressed in.

For example, when we say that the mass of a ball is 2 kilograms, then 2” is the magnitude and the unit is ‘kilogram’. However, dealing with the particles at an atomic or molecular level, this traditional concept will not work. Because even one gram of a pure element will contain a huge number of atoms. That’s why we are using the mole concept.

The formula for Number of Moles

The number of moles formula is given as follows:

The mole unit is very important and useful in chemistry. It is the base of the stoichiometry and it is providing the best option for expressing amounts of reactants and products consumed and formed during any chemical reaction. We may write all the chemical reactions as a mole relation.

For example in the following reaction:

It is also useful for representing concentration units like the molarity with the unit of mol \(L^{-1}\) i.e. mole per litre or molecular weight.

Number of moles formula is:

Given values in the problem are,

Now, formula is given as: