Phosphoric acid is one of the most famous acids that are in use in many industries, especially in the manufacturing of fertilizers. The salts of phosphoric acid which are phosphates are mainly in use in agriculture and even at home. Students might even hear this term “phosphoric acid” often in their chemistry classes. 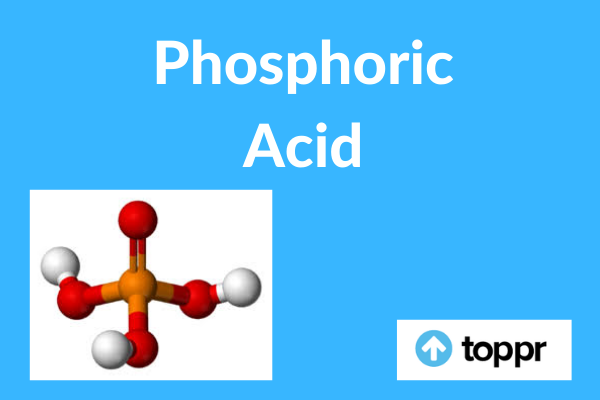 What is Phosphoric Acid?

Phosphoric acid is commonly heard in chemical laboratories as an 85% aqueous solution. Phosphoric acid is a colourless, odourless, and non-volatile syrupy liquid. Thou, phosphoric acid does not meet the strict definition of a strong acid but the 85% solution of it can still severely irritate the skin and damage the eyes.

Phosphoric acid is usually manufactured or prepared using two different types of processes. These processes are the wet process and the thermal process.

During the wet process of preparing phosphoric acid, it is produced from a naturally occurring crystal rock fluorapatite. Fluorapatite contains the phosphate mineral within it. This compound is then reacted with concentrated sulphuric acid \(H_2SO_4\) and water \(H_2O\). When this reaction takes place, it results in the formation of phosphoric acid and calcium sulfate i.e., gypsum with some amount of insoluble impurities. The extra chemical compounds and impurities are later removed by the process of filtration and evaporation. The acid is then concentrated to ca 56% – 70% \(P_2O_5\) I.E., super phosphoric acid using vacuum distillation. The reaction can be written as:

The product made from the wet process is an impure acid. This impure acid can be in use without further purification, for fertilizer manufacture.

Another method that is in use to produce phosphoric acid is the thermal process. In this process, phosphorus is given sufficient heat or burnt at high temperature in the presence of air. The results of burning in the generation of phosphorus pentoxide are then condensed to form a white powdery substance. Later It is hydrated in a separate process to obtain phosphoric acid.

Sometimes sufficient amount of steam is also given to the burner where a condensed form of polyphosphoric acids is produced. The products are then directly allowed to pass through a hydration tower. In the hydration tower, the gaseous phosphorus oxide is absorbed and phosphoric acid is obtained.

The salts of phosphoric acid are Phosphates. The important phosphates are –

Diammonium hydrogen phosphate and monoammonium dihydrogen phosphate and are commonly in use as fertilizers. They are produced by mixing the correct quantity of phosphoric acid with anhydrous ammonia in a revolving drum. The selection of which ammonium phosphate to use for the crop relies on the amount of nitrogen and phosphorus.

Calcium phosphates are broadly in use as fertilizers. It is made by the reaction of sulfuric acid with phosphate rock

This is the superphosphate. It contains about 20% \(P_2O_5\). On the reaction of phosphate, crystal is with phosphoric acid, other than sulfuric acid, a more intense form of calcium dihydrogen phosphate is produced with a general higher \(P_2O_5\) level i.e., 55%

This is triple superphosphate. This developed level of phosphate is attained because the yield is no longer diluted with calcium sulfate.

Question 1: Write a short note on the hazards of phosphoric acid.

Question 2: What are the physical and chemical properties of phosphoric acid?

Answer: Physical properties: A pure phosphoric acid is normally in the form of a white crystalline solid. It has a melting point of \(42.4^oC\). The acid is colourless, odourless and a viscous liquid with a density of 2.030 g.cm. Phosphoric acid is non-toxic and non-volatile in nature.

Chemical properties: Phosphoric acid or \(H_3PO_4\) release up to three \(H^+\) ions. Due to this property, phosphorous acid can react differently in comparison to other mineral acids. On reaction with bases, usually results in the formation of three classes of salts. When the molecules of phosphoric acid are exposed to high temperatures it forms dimers, trimers also long polymeric chains as seen in polyphosphoric acids and meta-phosphoric acids.

Question 3: What are the uses of phosphoric acid?

Answer: The common uses of phosphoric acid are –

In the treatment of Rust

Phosphoric acid is in use in treating rusts and removing them from metal components. It is useful in the process of the phosphate conversion coating. Phosphoric acid helps in corrosion resistance.

Phosphoric acid widely in use in adjusting or controlling the pH level in skincare products. Phosphoric acid is present in toothpaste, soaps, and detergents as well.