Ozone or trioxygen is an inorganic molecule and has the chemical formula O3. Ozone is a pale blue gas. It has a distinctively pungent smell. Ozone is an allotrope of oxygen. It is very less stable than the diatomic allotrope \(O_2\), breaking down in the lower atmosphere to \(O_2\) i.e., dioxygen.

Ozone is made from dioxygen by the action of ultraviolet (UV) light and electrical discharges within the Earth’s atmosphere. Ozone is present in very low concentrations throughout the latter. It has its highest concentration in the ozone layer of the stratosphere that absorbs most of the Sun’s ultraviolet (UV) radiation. 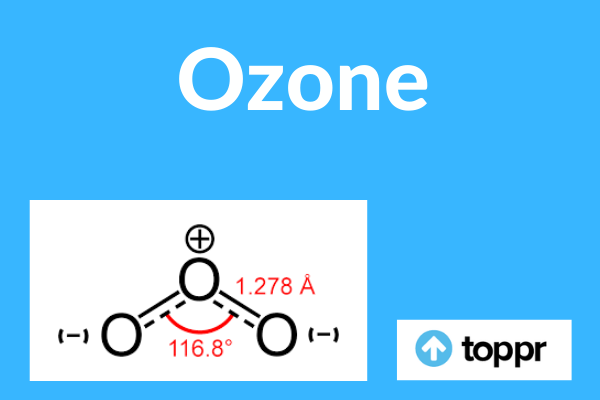 The odour of ozone is reminiscent of chlorine and detectable by many people at concentrations of as little as 0.1 ppm in air. The structure of ozone \(O_3\) came up in 1865. The molecule of ozone was proven to have a bent structure and to be weakly paramagnetic. Ozone is a pale blue gas that easily condenses at cryogenic temperatures to a dark blue liquid and at the end into a violet-black solid. The instability of ozone with regards to dioxygen such that both concentrated gas and liquid ozone may decompose explosively at elevated temperatures. Therefore, is commercially in use at low concentrations only.

Ozone is a strong oxidant, far more than dioxygen. Ozone has its demand in many industrial and consumer applications related to oxidation. This high oxidizing potential causes ozone to damage mucous and respiratory tissues in animals, and also in plants at concentrations of about 0.1 ppm. Ozone makes a potent respiratory hazard and pollutant near ground level. A higher concentration in the ozone layer (from 2 to 8 ppm) is beneficial, it prevents the damaging of ultraviolet (UV) light from reaching the Earth’s surface. The density of ozone is \(2.14 kg / m^3\). The molecular weight or molar mass of ozone is 48 g/mol.

It is a polar molecule and has a dipole moment of 0.53 D. The molecule of ozone can be represented as a resonance hybrid with two contributing structures. Each structure with a single bond on one side and a double bond on the other. The arrangement of ozone possesses an overall bond order of 1.5 for both sides. Ozone is isoelectronic with the nitrite anion. Ozone is composed of substituted isotopes like \(^{16}O, ^{17}O, ^{18}O\).

1)Ozone is a colourless or pale blue gas.

2)Ozone is slightly soluble in water and much more soluble in inert non-polar solvents like sulphuric acid, carbon tetrachloride or fluorocarbons that forms a blue solution.

5)Most people can detect about \(0.01 \mu mol\)/mol of ozone in the air where it has a very specific sharp odour some what resembling chlorine bleach.

6)Exposure of \(0.1 to 1 \mu mol\)/mol of ozone causes headaches, burning eyes and irritation to the respiratory passages. At low concentrations in the air, ozone is very destructive to organic materials like latex, plastics and animal lung tissue.

1)Ozone easily dissolves in water results in the formation of hydrogen peroxide. The chemical equation for the same is

2)Ozone reacts with lead sulfide that results in the formation of lead sulfate. The chemical equation for the same is

Question 1: Is ozone toxic to breathe?
Answer: Ozone is toxic as ozone can cause damage to the lungs when inhaled. Relatively at low ozone levels, ozone can cause pain in the throat, coughing, shortness of breath and inflammation in the lungs.

Question 2:  Is ozone a resonance structure?
Answer: Ozone has two resonance structures that equally contribute to the molecule’s overall hybrid structure. The two arrangements are similar to a point of equilibrium. Each arrangement is having a positive and negative formal charge on two of the oxygen atoms.

Question 3:  How many lone pairs are in Ozone?
Answer: One single pair is present in the ozone. As ozone has 18 valence electrons out of which there is only one pair of electrons.