Let us first understand what is acid. An acid is a chemical compound that releases H+ ions in an aqueous solution. We can test the acidic or basic nature of a compound by using an acid-base indicator or litmus paper. Formic acid comes in the carboxylic acid group. It is written as HCOOH and formic acid is the first member of the carboxylic acid group. Formic acid is also known as methanoic acid. To describe in detail, the formic acid formula contains 2 oxygen atoms, a single carbon atom, and 2 hydrogen atoms. Formic acid is colourless and fuming liquid. It also has a pungent acrid odour.  Formic acid is in use as a preservative and antibacterial agent, it is also useful in the manufacturing of leather and rubber. It is useful as a miticide by beekeepers. 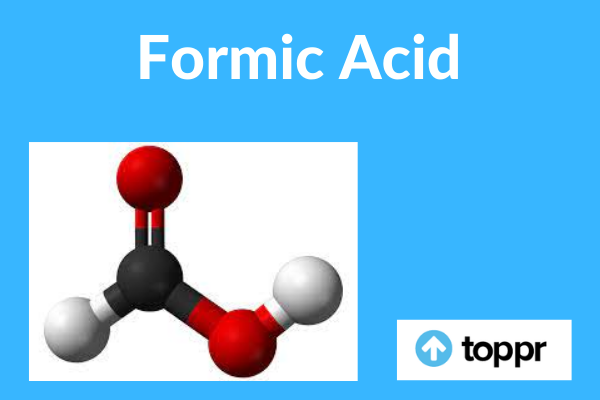 Formic Acid is a Strong Acid

Q.1. How can we neutralise formic acid?

Answer. Baking soda is useful for the neutralisation of formic acid. If we spell some formic acid on our skin or concrete we can use a thick paste of sodium bicarbonate water to neutralise it.

Q.2. Which acid is more acidic formic or acetic?

Answer. Formic acid is stronger than acetic acid because it does not consist of a contributing group of electrons. The methyl group is an electron-donating group that destabilise is the conjugate base’s negative charge, this is also one of the reasons that acetic is less acidic than formic acid.

Q.3. What is the Lewis structure form of formic acid?