Tartaric acid is a white and crystalline that occurs naturally in many fruits and vegetables and most notably in grapes. It is also present in bananas, tamarinds, and citrus. The salt i.e., potassium bitartrate also called cream of tartar, develops naturally in the process of fermentation. It is commonly mixed with sodium bicarbonate and is sold as a baking powder that is in use as a leavening agent in food preparation. The tartaric acid is added to foods being an antioxidant i.e., E334 and to impart its distinctive sour taste. 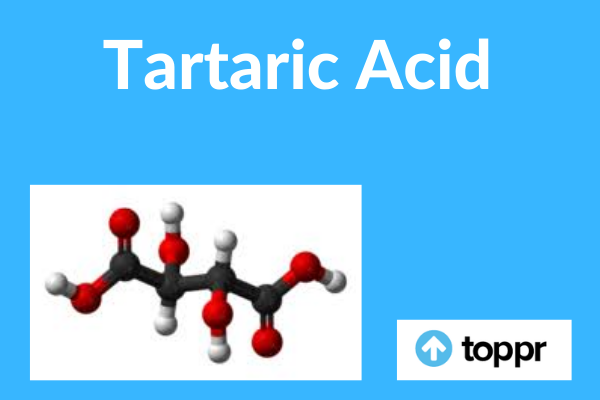 Tartaric acid is a muscle toxin. It works by prohibiting the production of malic acid and in high doses, it causes paralysis and death. The median lethal dose is about 7.5 grams/kg for a human, 5.3 grams/kg for rabbits, and 4.4 grams/kg for mice. As a food additive, it is used as an antioxidant with E number E334. Tartrates are additives serving as antioxidants or emulsifiers.

Later, the epoxide is hydrolyzed.

Answer: Tartaric acid is the acid most prescribed for modifications. It is a stronger acid than malic and citric acid, and but less susceptible to microorganism breakdown during alcoholic and malolactic fermentations. Tartaric acid is a potassium salt that easily tends to precipitate.

Question 2: What is the difference between tartaric acid and citric acid?