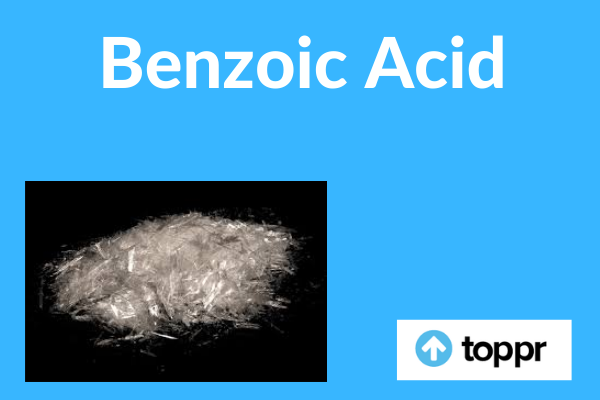 What is Benzoic Acid?

Benzoic acid is commercially produced in industries by partial oxidation of toluene with oxygen. Cobalt or manganese naphthenates acts as a catalyst in this process. This process of production of benzoic acid uses abundant materials and proceeds in high yield.

In the industrial process, there is a reaction of benzotrichloride with calcium hydroxide in water. It is done using iron or iron salts as a catalyst. The calcium benzoate as a result is converted into benzoic acid with hydrochloric acid (HCl). The product has a significant number of derivatives of chlorinated benzoic acid.

Benzoic acid is cheap and readily available. The laboratory synthesis of benzoic acid is done for its pedagogical value. It is a common preparation process.

On hydrolysis of benzonitrile and benzamide, it converts into benzoic acid. It can also convert into its conjugate base in acid or basic conditions.

Bromobenzene is converted into benzoic acid by carboxylation of the intermediate phenylmagnesium bromide.

Benzoic acid has a carboxyl group, which is acidic and so it reacts with a base like sodium hydroxide to produce a salt, sodium benzoate \(C_6H_5COO^- and Na^+\). It is an iron compound and when sodium benzoate is treated with an acid such as HCI and it forms the reactant back.

When benzoic acid reacts with any alcohol in presence of sulfuric acid. Here sulfuric acid acts as a dehydrating agent. In reaction, it removes water molecule produced by the combination of acid and alcohol to form a pleasant-smelling ester, ethyl benzoate. This reaction is an esterification reaction.

When benzoic acid reacts with thionyl chloride \(SOCI_2\) or Phosphorus pentachloride \(PCI_5\), it forms benzoyl chloride that is an example of acyl or acid halides.

Benzoyl chloride is highly reactive and so it reacts with an amine such as methylamine \(CH_3NH_2\) or with ammonia \(NH_3\) to form benzamide \(C_6H_5CONH_2\).

When benzoic acid reacts with the fuming sulfuric acid \(H_2SO_4\) it leads to the sulfonation of the benzene ring. In this reaction, the functional group \(SO_3H\) replaces H- atom in the meta position to the carboxylic acid group on the benzene ring, and so the product is meta-sulfobenzoic acid.

With a nitrating agent, sulfuric acid acting as a catalyst, the nitro \(NO_2\) group occupies the meta position (over ortho or para position) relative to the position of the carboxyl group in the benzene ring.

During the halogenation of benzoic acid, chlorine \(CI_2\) reacts with benzoic acid in presence of a catalyst ferric chloride \(FeCl_2\) to form meta chlorobenzoic acid \(CI-C_6H_4-COOH\).

The term decarboxylation is the removal of carbon dioxide. Sodium carbonate \(Na_2CO_3\) on treating with the sodium salt of benzoic acid (sodium benzoate) using soda lime (a mixture of NaOH and CaO) forms benzene.

When the benzoic anhydride is treated with sodium borohydride, it is followed by acid hydrolysis. Thus, converts into benzoic acid and benzyl alcohol.

When benzoic acid treats with lithium aluminium hydride it converts into benzyl alcohol. It is a controlled oxidation reaction it gets converted into benzaldehyde.

Question 1: What are the uses of benzoic acid?

Answer: The primary use of benzoic acid is in the industrial production of phenol (aromatic compound). This is done through a process i.e., oxidative decarboxylation. It should be noted that the ideal temperature under which this process should be carried out is in the range of 300 Celsius to 400 degrees Celsius. Benzoic acid and its salts are broadly in use in the food industry as food preservatives.

Question 2: Write in short about the solubility of benzoic acid in water.

Question 3: How can benzoic acid be prepared?